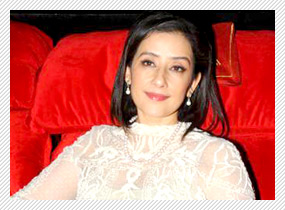 Manisha Koirala's close friends are in a state of shock, too numbed by her sudden illness, to let the gravity of her situation sink in.

While family members begged off any on-record comment with the understandable plea of requiring privacy at a time like this, a very close friend of the actress revealed how the death of her mentor and dear friend cinematographer Ashok Mehta had left Manisha shaken and unsure of her own health and the future.

Asking to be "left out of public demonstrations of concern" this friend reveals, "When a friend Mona Kapoor passed away suddenly, Manisha told me she was apprehensive about her own health. 'I better have myself thoroughly checked,' she had told me. A few months later Manisha lost her dear friend Ashok Mehta. She was distraught. 'There is no certainty in life anymore,' she had said. I am not sure whether she got all the tests done on herself at that time. But she had said she was going to."

The genial warm actress had lately been distressed by her failed marriage.

"She really wanted it to work and gave it her best shot. And when it didn't work out, she took it as a personal failure. 'I guess I am not destined to be a wife,' she told us, her friends. Manisha gives 200 percent of herself to all her relationships. She is within her rights to expect at least some love in return. We are there for her at this time. But Manisha wants to fight her illness on her own."

The friend says Manisha was lately in a cheerful mood.

"She has come to terms with her failed marriage, as she does with all the setbacks in her life. Manisha will fight this out," says the friend.

The actress has decided not to speak about the illness until the process of healing begins formally.