Malaika Arora recently returned from a Paris vacation with actor-boyfriend Arjun Kapoor, bumped into a newly married couple recently. The actress-dancer met up with South superstar Nayanthara and her filmmaker husband Vignesh Shivan. The couple, who recently tied the knot in Mahabalipuram, had a small but star studded wedding amidst picturesque locales. While the actress-dancer wasn’t a part of the celebrations, she seems to have caught up with them recently. 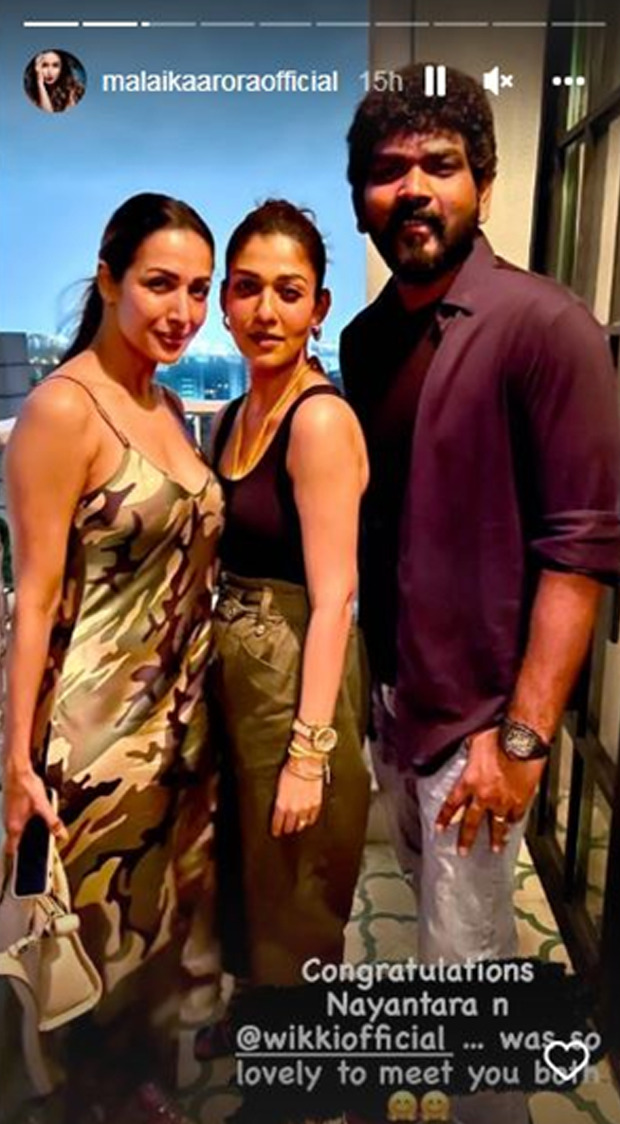 Malaika Arora took to Instagram to share this photo on her story along with Nayanthara and Vignesh Shivan. Happy to have met the newlyweds, the actress congratulated on them on their big day. She said, “Congratulations Nayantara n @wikkiofficial’ was lovely to meet you both."

On the other hand, Nayanthara and husband Vignesh Shivan recently celebrated their one month anniversary by sharing unseen photos from their wedding. They shared photos from some big names from the entertainment industry which includes stars like Shah Rukh Khan, Rajinikanth, Suriya-Jyothika, and many others who attended their wedding. Talking about her work, the actress recently flew to Mumbai to complete a schedule with superstar Shah Rukh Khan for their forthcoming film Jawan, directed by Atlee.

On the other hand, Malaika recently rang in the birthday of boyfriend Arjun Kapoor in Paris and gave us all a glimpse of the celebrations on social media by sharing photos and videos from the trip. However, the duo returned to the city soon, as the actor has currently kicked off the promotions of the multi-starrer thriller Ek Villain Returns, also starring John Abraham, Disha Patani, and Tara Sutaria. The film, directed by Mohit Suri, will release on July 29.