Pakistani actress Mahira Khan hit back at a troll on Twitter who called her 'bhikari (beggar) and used derogatory terms for her country. While Mahira responded to the tweet, the user later deleted his original tweet when it started going viral.

"Betay, you’re the one focusing on me now bugger off," she wrote responding to the tweet. 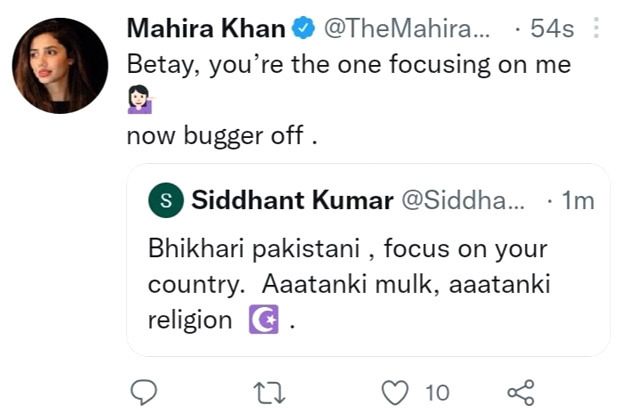 The actress also responded to an admirer who wrote,"Mahira ji can I propose to you please once, beautiful? #askmahira”.

"Propose na yaar. What’s stopping you? Just know that my answer has been pretty consistent through the years," she responded politely.

Just know that my answer has been pretty consistent through the years. ????????‍♀️ https://t.co/cwt63HvJz7

Mahira made her Bollywood debut in 207 with the Shah Rukh Khan starrer Raees. However, she could not continue her career in India as Pakistani artists were banned from working in India after the situation at the border between the two countries became tense. The actress is widely known for portraying the role of Khirad Ashar Hussain in Momina Duraid's Humsafar.

ALSO READ: Pakistani actress Mahira Khan of Raees pays tribute to Lata Mangeshkar; days, “There will never be another”