It's the era of remakes and the fans want to some of their favorite stars in these films. While there are talks about Andaz Apna Apna and Ram Lakhan remakes, the other remakes that have been confirmed are Coolie No 1 and Pati Patni Aur Woh. But, if there were a chance to reprise Hum Aapke Hai Koun, who would reprise the role of the lovely pair Prem essayed by Salman Khan and Nisha played by Madhuri Dixit? Well, Madhuri has an answer for it. Madhuri Dixit, who is currently promoting Kalank, feels Varun Dhawan and Alia Bhatt would be the perfect fit for the roles. 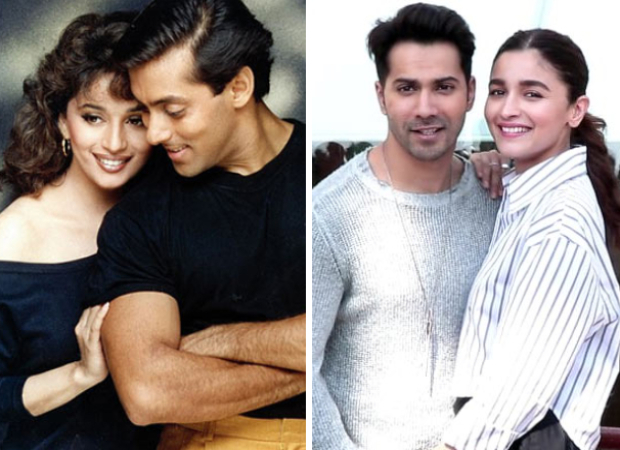 Madhuri Dixit recently said that it all depends on the way characters are written. The writers are very important in the films and the way they pen those dialogues and scenes, determine the chemistry between the two actors. She said that just because two actors know each other that doesn’t mean their chemistry can be created. For her, anyone can essay the role. When quizzed if her Kalank co-stars Varun Dhawan and Alia Bhatt can essay the role of Prem and Nisha, the actress said she said that they easily play the roles. Speaking of Alia Bhatt, Madhuri Dixit said that Alia Bhatt is a very good actress who can imbibe the roles and fit into any character and make it her own. She said that they will definitely be good.

When Alia Bhatt came to know about Madhuri Dixit's views, she was surprised and said that somebody needs to call up Sooraj Barjatya and he should only make the film. She thinks no one else can be Prem and Nisha because that was an iconic film. Alia said that Madhuri ma'am was too gracious to say that.

Coming back to Kalank, the film directed by Abhishek Varman is set for April 17 release.

ALSO READ: Kalank - ‘Tabah Ho Gayi’ will be a treat for Madhuri Dixit fans as they will see the actress perform Kathak yet again!