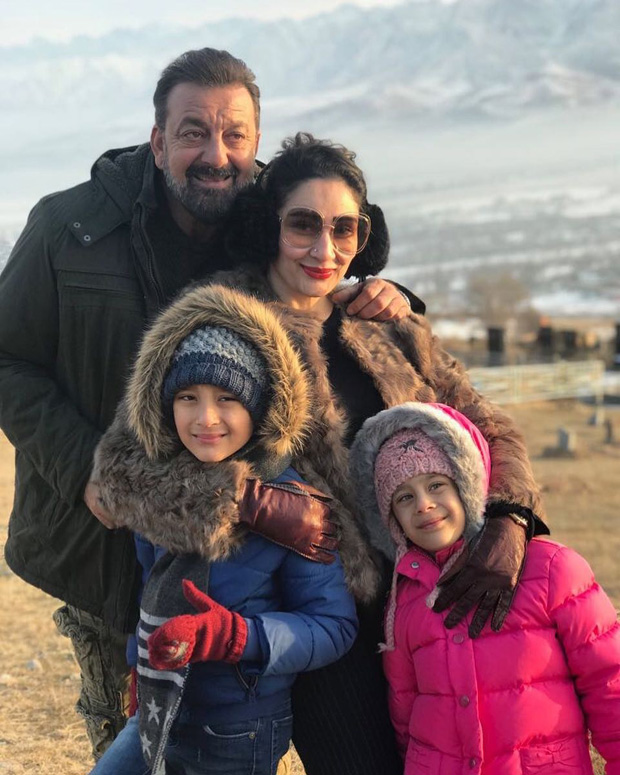 Just yesterday we had reported that Sanjay Dutt had commenced work on his next venture Torbazz. In fact, the actor had even shared a couple of images of the muharat of the film that went on floors in Bishkek in Krygyzstan. Well now we hear that Sanjay Dutt’s wife Maanayata and their kids have joined him on sets of the film.

Taking to the image sharing website Instagram, Dutt shared an image posing with Maanayata and his kids Iqra and Shahraan saying, “When I have them, I have everything. With Iqra, Shahraan and @maanayata in Kyrgyzstan #Torbaaz #blessed #family”. On her part Maanayata too shared an image on her Instagram profile, that was a selfie saying, “Selfie right from the sets of Torbaaz #bishkek #krygyzstan #love #grace #positivity #dutts #shooting #winters #freezingcold #lovelyweather # beautifullife #thankyougod”.

Torbaaz that is being directed by Girish Malik is said to be an action-thriller set in Afghanistan. Joining Sanjay Dutt in the film will be Nargis Fakhri playing an Afghan girl who runs an NGO.