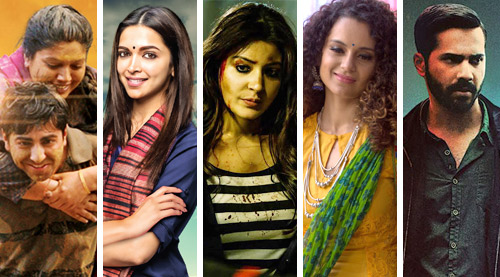 2015 saw some superstars striking gold at the box office. However, the year also saw a new trend that has gained momentum. We are talking about films that may have boasted of stars yet it was the content that has made them an experience worth remembering.


Before the year 2015 comes to an end, let us take a jog down the memory lane and look at films that have made a difference. We may not be necessarily taking into consideration the box office numbers but years later these films will be remembered for the quality of cinema they offered and plotlines that have tugged the strings of your hearts.


Dum Laga Ke Haisha: Amidst size zero obsession and the constant pressure imposed on women to maintain their body, Dum Laga Ke Haisha starring Ayushmann Khuranna and debutant Bhumi Pednekar entered as a refreshing change. Besides being a love story, the film teaches you to love yourself the way you are and what followed was yet another happy ending. Set in a rustic backdrop, the 90s charm just adds to the beautiful love story weaved with a blend of comedy and emotions.


Piku: Who says every film requires conventional heroes, heroines and villains? Piku (also the name of Deepika Padukone's character in the film) traces the journey of an independent woman and her relation with her father. Unlike the usual melodramatic portrayal of emotions in Indian families, Piku is a simple story of a father who is obsessed with constipation as he stubbornly decides to go to his hometown Kolkata by road accompanied by his daughter and a cab company owner who turns into a driver for the family. Emotions, puns and realism make the film relatable and it also portrays the intricacies of senior citizens and elders in our family with conviction.


NH10: The violence and gore prevailing in North India forms the premise of this debut Anushka Sharma production. Anushka who also plays a protagonist sets out on a romantic journey with her husband which turns into a nightmare as they get involved in a brawl on the highway NH10. The film that revolves around social issues of honour killings, the growing crime against women in North India deals with these gruesome happenings sensitively but remains grounded to reality. As Anushka Sharma walks around the deserted areas of highway, brutally hitting people in a fit of rage and in a hope of survival, her vengeance and helplessness will definitely make you cringe with fear yet empathize over her condition.


Tanu Weds Manu Returns: A film that touches upon infidelity and the effects of post marriage makes up for a perfect love story, though a rather unconventional one. One of the rarest films which had a hit prequel but the second installment was a blockbuster. Bored of their marriage and constant fights, Kangna aka Tanu walks out of her relationship with Manu. Her husband meets a lookalike only to realize that she is totally different from his wife and decides to take his relationship forward with her. No romantic locations, snow-capped mountains and chiffon sarees yet the film is a perfect entertainer with mixed emotions, flawed characters and a twisted storyline.


Badlapur: As the title suggests, the film can be defined in one line - Vengeance that is pure and violent. Brilliant performances by Nawazuddin Siddiqui and the young gun Varun Dhawan makes the film what it is - gripping and edgy. There are no protagonists and antagonists - only grey characters whose solo aim to reach their destination no matter how crooked the way is. Varun sets out to avenge the killer of his wife and kid and a man who has to save himself from the blood thirsty enemy, what follows is a series of the cat and mouse game where only one can be the survivor.


Talvar: Based on true events of the Aarushi Talwar murder case, the Meghna Gulzar directorial portrays the reality behind the most controversial case in the recent history of India. The double murder case of a 14 year old and a domestic help that had sent the entire nation in a tizzy, Talvar follows the path of truth wherein the entire sequence of the murder and the conviction of the parents in the case has been handled delicately. More so, despite that, the film manages to showcase some unrevealed facts about the case, the deep-rooted corruption, the sloppiness of the police department and a brave battle lost by an honest police officer as it brings about a new perspective to the truth behind the Aarushi Talwar murder. In fact, the film also proved to be a catalyst as it helped in kick starting yet another campaign - a fight for the justice of Aarushi Talwar.


Drishyam: This suspense thriller probably is one of Ajay Devgn's most powerful performances. A simple man and his family find themselves caught in a high profile murder case of a college student, son of a powerful police commissioner. The truth, evidence and most importantly, the fight between right and wrong - the film that traces the struggle of a man whose, sole aim is to protect the family. 'Truth is not what we know, it is what we see' - the film that manages to defy this adage will make one question about the facts of truth as we get to see a new perspective in this case, that otherwise, is a mere murder case.


Pyaar Ka Punchnama 2: Stringent budget and with no big names involved, Pyaar Ka Punchnama 2 that continues its women bashing stories even its sequel managed to grab the attention of the audiences even in this second installment. Though it marked the debut of two male protagonists, the film retains its humour element intact and Kartik Aryan once again walked away with all praises. Three men and their love story with their dominating and bratty girlfriends once again tickled the funny bone of all, especially the ones who don't believe in relationships. However, we believe that this kind of rom-com wouldn't be able to recreate its magic in the third installment if the makers are planning any!