Ranbir Kapoor is all set to floor us with two movies, Brahmastra and the Dutt biopic, in the upcoming months. We are excited for both films as they are totally distinct from each other and hold out a promise to showcase completely diverse avatars of the Kapoor scion. We are already stunned by Ranbir’s transformation into Sanjay Dutt and now, the cast and crew of the film are releasing pics from the sets every day, making us desperate for the film. 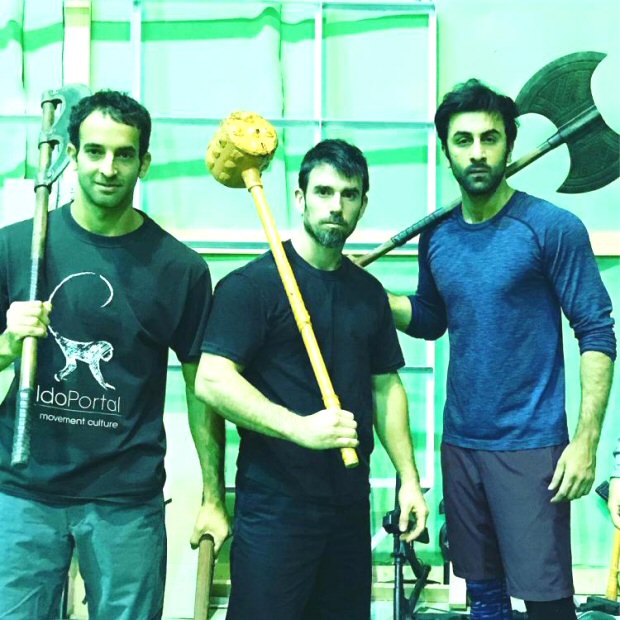 We know that when Ayan Mukherjee and Ranbir Kapoor come together, they make magic on screen. Their last two films: Wake Up Sid! and Yeh Jawaani Hai Deewani is a testimony to this fact. Now, adding on to this lethal combination is Alia Bhatt who is cast opposite Ranbir in the Ayan’s upcoming supernatural film Brahmastra. The film is based on a supernatural theme and will be a trilogy. After a reiki in Israel, the cast and crew of the film is in Sofia, Bulgaria for the shoot. The film is helmed by Karan Johar’s Dharma Productions and he clearly is leaving no stone unturned to make sure that the film is made on a grand scale.

Ranbir’s trainers took to Instagram yesterday to share an image of the star with three weapons. He looks fierce and makes us wonder if this is the Brahmastra that the film is about.  Ranbir definitely looks leaner and meaner in this avatar. Speaking about the film on one occasion, the lead actor said that it is ‘a magical romantic fairy tale set in contemporary times.’ Amitabh Bachchan too will be seen in the film. Ayan plans to make this film in the span of eight years.

Stay tuned to know more about the film.