Kartik Aaryan, who has been garnering incessant praises and love for his role as Arjun Pathak  Dhamaka, can be seen rocking a whole new avatar for Shehzada as pictures of his look got leaked. The Shehzada in Delhi is on a roll to surprise his fans. 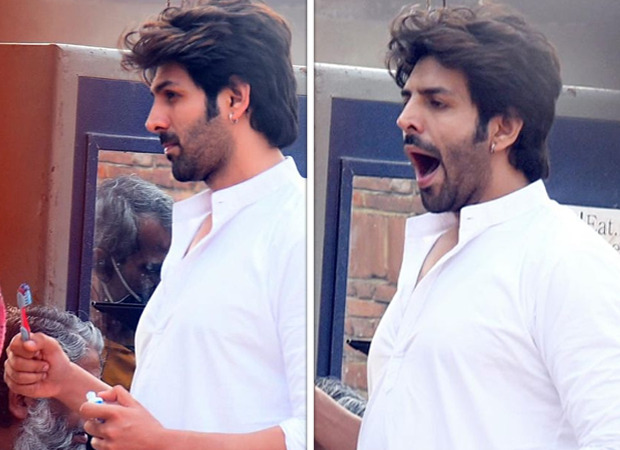 Kartik had recently flown to Delhi for the shoot of his next, Shehzada by Rohit Dhawan, and was spotted shooting near Jama Masjid. Shooting at a real location, his look from the sets was revealed and he has definitely taken everyone by surprise.

He looks super cool and attractive in a white kurta, rocking an earring and a beard while holding a brush in his hand. The entire look is very new for Kartik Aaryan.

Currently, not only Kartik but two other superstars are also shooting in the national capital including Ranveer Singh for Rocky Aur Rani Ki Prem Kahani and Ranbir Kapoor for Luv Ranjan's untitled next.

Helmed by Rohit Dhawan, Shehzada is one of the highly anticipated films of the year. The film stars Kartik Aaryan, Kriti Sanon, Manisha Koirala, Paresh Rawal, Ronit Roy, and Sachin Khedekar lead roles. The film is releasing on November 4, 2022.