Actor Kumail Nanjiani is set to star in Marvel's The Eternals. The actor underwent an insane physical transformation and his shirtless photographs went viral on social media. 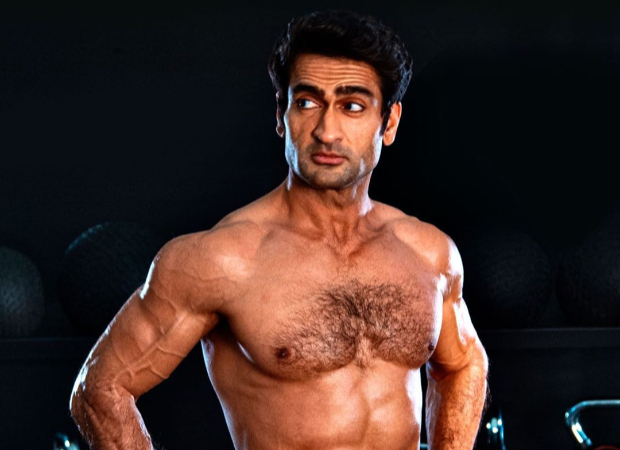 "Making this massive movie in many important ways still feels like you’re making an independent movie, in the sense that it really feels like a family and it feels like it’s really about characters and relationships and very small moments. So while you have certain scenes where you’re hanging up on a wire fighting bad guys and you have all these superpowers, the rest of it does feel like you’re making something really small," he further said.

On Thursday, he appeared on Jimmy Kimmel Live for Little America promotions and spoke about his shirtless photos of his physical transformation that set the internet on fire. "The biggest problem is once you get that, you don't stop exercising," Nanjiani explained. Kimmel pointed out how ripped the actor was now, to which he responded, "I wish it was like a video game where you hit save."

I never thought I’d be one of those people who would post a thirsty shirtless, but I’ve worked way too hard for way too long so here we are. You either die a hero, or you live long enough to see yourself become the villain. I found out a year ago I was going to be in Marvel’s Eternals and decided I wanted to transform how I looked. I would not have been able to do this if I didn’t have a full year with the best trainers and nutritionists paid for by the biggest studio in the world. I’m glad I look like this, but I also understand why I never did before. It would have been impossible without these resources and time. So big thanks to @grantrobertsfit who started working with me at the beginning of the year and made me understand true physical pain for months and months. Then, once we started shooting, a massive thanks to @davidhigginslondon and his team (@ellispartridge, @thebeardypt, @tomcheesemanfitness) for training me almost every day and making me strong, limber and injury free. I can almost touch my toes now. (And thank you for forcing me to do cheat meals David.) Matthews Street Catering for their delicious and healthy meals. And finally, the biggest thanks goes to @emilyvgordon for putting up with me complaining and talking about only working out and dieting for the last year. I promise I’ll be interesting again some day. #thirstyshirtless (Photo by @markupson.) (edit: I left off one very important person: @lancecallahan who trained me for 6 years and helped me build the foundation I could use to do this. Thank you!)

He said that he took the photos before Christmas to save it as a proof that he did look that way. "Who knows what I'm going to look like after Christmas? As soon as I saw the picture, I was like the world must see this," he quipped. "It was a weird couple of days... It really got out of control," he said.

"My brother said, 'Dad already sent your naked pics to both family's Whatsapp groups.' And then it goes in newspapers in Pakistan. So, I had all my aunts texting me pictures of myself, like 'so proud of you.' It's weird to have your aunts sending you naked pictures of yourself. I think I messed up my veins by working out. Those aren't going anywhere. Where are those going? Shouldn't they be going to the heart?" Nanjiani joked.

Kumail also joked about how everyone was putting side by side images of him to showcase his shocking transformation. "Was I like leaving a trail of slime behind me? I was normal looking," Nanjiani said.

But, he was surprised to receive attention from one superstar. "Dwayne the Rock Johnson said, 'dense muscle is hard to achieve, my brother.' He thinks my muscle is dense. How he could see that? If the Rock says it, who knows better?"

"You work out every day and you sort of learn to enjoy it. The diet is the hardest thing. I haven't had pizza or a donut in over a year. I've had no refined sugar in a year, almost no carbs at all. You know what my snack has been? I get a bag of sugar snap peas and I eat them. That's what I've been doing at night."

The Eternals will be the next superhero team that will release in November 2020. The film stars Angelina Jolie, Salma Hayek, Richard Madden, Kit Harington, and Brian Tyree Henry.