We all remember how Kriti Sanon grooved to the peppy ‘Aao Kabhi Haveli’ number from the horror comedy Stree. While she didn’t star in this spooky comedy film, the actress is gearing up for another comedy, albeit with a supernatural theme.  Housefull 4 starring Akshay Kumar and an ensemble cast is expected to be based on reincarnation. While further details are kept under wraps, this photo shared by Kriti makes us wonder if there is a horror theme too! 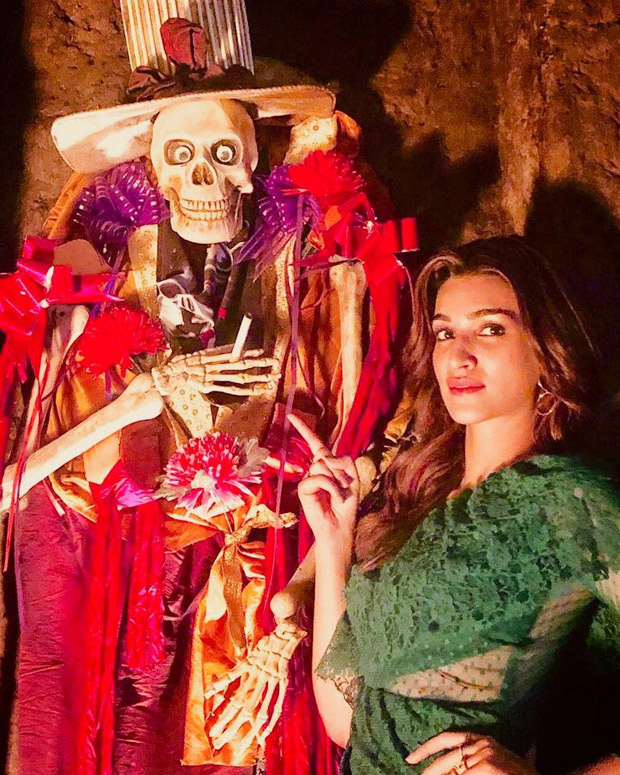 The team of Housefull 4 seems to have wrapped up their film and the actors too have turned focus to their other pending projects. However, leading lady Kriti Sanon seems to be missing all the fun on the sets of the film and has been sharing behind the scenes photos from recent song shoot. Earlier this week, she reposted a photo of the entire cast sitting on a throne of skulls. And now, Kriti is seen posing with a dressed up skeleton and she has shared the said picture with a quirky caption too! Here’s a look at the post:

Speaking about Housefull 4, the film will bring together Akshay Kumar and Kriti Sanon for the first time. It also stars Bobby Deol, Riteish Deshmukh, Kriti Kharbanda, Pooja Hegde, Chunky Pandey amongst others. Directed by Farhad Samji, the film is expected to release during Diwali this year.

On the other hand, Kriti also has a few interesting films in the pipeline which includes the comic caper Arjun Patiala starring Diljit Dosanjh and Varun Sharma as well as the historical war drama Panipat featuring Arjun Kapoor and Sanjay Dutt.

Also Read: Akshay Kumar shared an exclusive still from Housefull 4 and it has a major GoT reference!