Arjun Kapoor could be called as the ‘mascot’ of Koffee With Karan. At least that’s what Karan Johar addressed the Ishaqzaade actor as, when he returned to the show this season on the Raksha Bandhan special. The actor was on the show with the much pregnant Sonam Kapoor and amidst conversations about family and childhood, they also discussed their bond with B-town. During the show, when Karan Johar asked the actor to choose his traveling partners for a road trip, his answer was Ranveer Singh, Ranbir Kapoor, and Varun Dhawan. Interestingly, he chose them yet again as travel partners when he was asked something similar for Mans World magazine. 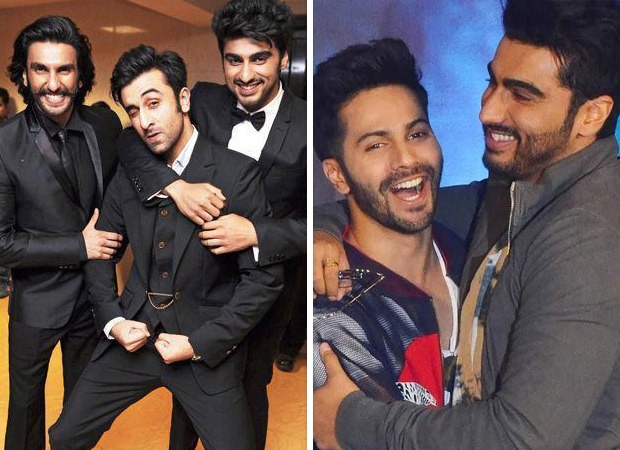 Koffee With Karan 7: Arjun Kapoor reveals that his trip partners would be Ranveer Singh, Ranbir Kapoor, and Varun Dhawan and here’s why

While it doesn’t come as a surprise that Arjun Kapoor chose Ranveer Singh as his travel partner, since both the actors share a fab camaraderie off screen, Ranbir Kapoor and Varun Dhawan joining the gang definitely left many surprised. During his conversation with the magazine, when the actor was asked to choose his travel partners, he mentioned the trio’s name but in Koffee With Karan 7, he also explained to host Karan Johar why he chose the three of them as his road trip buddies.

Speaking to KJo, he reasoned why he requires these three actors as his travel partners, adding, “Ranveer Singh because you need entertainment, Ranbir Kapoor because you need class with your entertainment. You need to spend a lot of money and have a gala time. And Varun Dhawan because we need to make sure that we need to market the holiday really well and have good images.” Karan quipped adding, “So that, he takes care of your social media.”

Interestingly, except for Arjun Kapoor and Ranveer Singh, who came together for Gunday, the actor hasn’t shared screen space with any of the others.