Audi India, the German luxury car maker, that recently associated with the Star World Original show Koffee with Karan for its 6th season, delivered the answer of the season award- the Audi A5 Sportback to Ajay Devgn. The answer of the season was chosen from the quirkiest and most fun answers given by the guests in the sixth season of Koffee with Karan that airs Sundays at 9 pm on Star World. 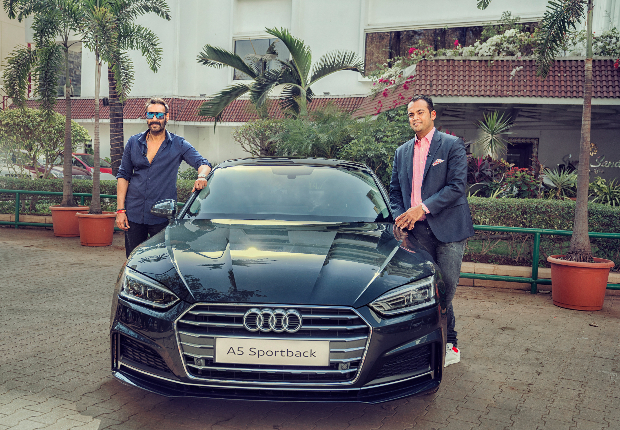 “Audi has always been associated with the topmost events and properties in the world of entertainment and sports, globally as well as locally. This is why we are encouraged to have received a fantastic response from our association in India with ‘Koffee with Karan’. Our philosophy of ‘Audi is more’ not only reflects in our products but our marketing strategy is a clear demonstration of the same as well. The announcement of the Answer of the Season winner getting a brand new Audi A5 Sportback added a lot of intrigue to the show and created popular debates amongst fans every week on which answer should win an Audi. Even the enthusiasm on the show by the celebrities has taken the importance of the answer of the season to the next level. We at Audi India are really excited to hand over the Audi A5 Sportback to Mr. Ajay Devgn and welcome him to the Audi family,” said Mr. Rahil Ansari, Head, Audi India.

Audi completed ten years in India in 2017 and within this short span, the brand has become one of the most preferred luxury car brands for enthusiasts in the country through a progressive and engaging marketing strategy. In the last 10 years, brand Audi has been successfully able to achieve the change of philosophy in the Indian market. Audi is now being perceived as being a global brand that is Indianised – from being known as a ‘brand with four rings’ to ‘char bangdi’ or ‘char chudiya’, Audi has successfully entrenched itself in the Indian pop culture. A large part of this is attributed to a glocal content strategy through effective curation of content types and media channels to bring a sound degree of market disruption in the segment.

The brand with four rings upped the glamour quotient by associating with the sixth season of Koffee with Karan show, which featured India’s most famous celebrities.

14 years ago, filmmaker Karan Johar wanted to create a show unlike any chat show India had ever seen – he wanted fans to see their favourite celebrities let their hair down, reveal secrets and have fun. Since then, Koffee with Karan, a Star World Original, has become synonymous with Bollywood. The new season not only brought new and upcoming actors on the couch but also lead to interesting conversations and fun segments.

ALSO READ: Ajay Devgn gives a SAVAGE reply to Kapil Sharma after he wishes the team of Total Dhamaal for their success!