By now, many would be aware that Ajay Devgn is quite the prankster on sets, as per what his co-stars have revealed by far. The actor also shares a great sense of humour, something that was quite visible on the show Koffee With Karan 6 and obviously his films too. Total Dhamaal, that has been setting the box office ringing, is one such rib tickling film! While Ajay visited The Kapil Sharma Show for the promotions, the actors definitely had a gala time. The show’s host Kapil Sharma now took to Twitter to congratulate the team for their recent success and the superstar had a befitting reply that has ‘savage’ written all over it! 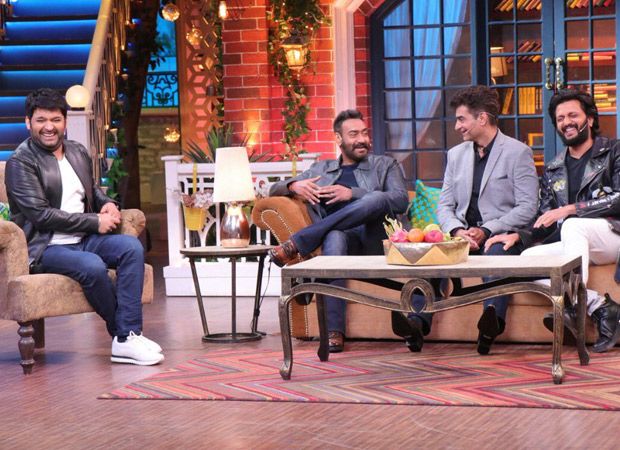 It is a known fact that Ajay Devgn, Riteish Deshmukh and the rest of the team of Total Dhamaal visited the sets of The Kapil Sharma Show for the promotions of their film. While this was quite some time ago, sharing a moment from the episode, Kapil Sharma took to Twitter to speak about the film. The comedian turned actor posted a congratulatory message to them wishing them for their film’s success saying, “Congratulations @ajaydevgn paji @AnilKapoor sir @MadhuriDixit mam @Riteishd n the entire team of #TotalDhamaal hearing great reviews about the movie.. will watch it soon.”

Knowing the amazing sense of humour that this Golmaal actor Ajay Devgn has, we aren’tsurp surprised to see him respond to Kapil’s tweet, albeit with quirks. “Tu picture dekh and for a change dusron ke jokes pe bhi has le.. sirf apne jokes pe hasta rehta hai hamesha!”

Also Read: EXCLUSIVE: “I would love to be a part of the Total Dhamaal series!” – Ajay Devgn