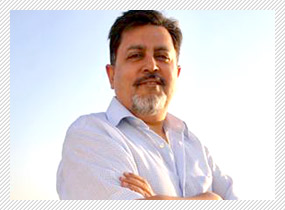 Let's be very clear, Entertainment business CEOs don't get busy playing PlayStation in their office, although, sometimes it might help change amid internal creative discussions over the final shape of restructuring a movie. When you walk into the spacious office of Fox Star Studios and have a glance at their busy-like-bees employees, you ponder that their Boss Vijay Singh might be a gamer. Creativity galores in the Fox domain as Vijay has created a position overseeing the business and its creativity giving profitable pleasures to one and all. He is now geared up for his next biggie - Vishal Bhardwaj's Matru Ki Bijli Ka Mandola and looking forward to kick some b*** with the remake of Knight And Day staring Hrithik Roshan and Katrina Kaif. The CEO is passionate about his work as much he is about his coffee and he both listens and is listened to - that rare combination - and he likes making friends in his first meeting by asking strangers ('me' included) for their reel and real stories. And that's the twist: Vijay Singh, while owning and enjoying the attributes of a regular guy - isn't a regular guy at all. He's one of the most successful men in the movie business. Part 2 of my exclusive chat continues....

Matru Ki Bijli Ka Mandola is a biggie for Fox, compared to other movies you've got under your banner. What are the prospects looking like?

Matru Ki Bijli Ka Mandola is a hugely exciting film. It's a fascinating film because here comes a comedy from Vishal Bhardwaj. It's set in Haryana and that's why it's rooted. The music is always exceptional from Vishal and so is this one. To take Imran was a conscious decision and we wanted to surprise the audience with what they would be seeing this time on the big screen. Imran Khan in a role they'd have never ever expected him to do. We were able to achieve that. It has a very strong stamp of Vishal and is pretty quirky and we also have the 'gulabi bhes' (pink buffalo).

There was a great vibe when I entered the Fox Star office...

(Laughs) The team we have at Fox India is absolutely great. To get the right team in place isn't an easy task, especially with so many talents to choose from. Having set up Sony Music in India, I was pretty much aware of the entertainment business. We needed a mix of talent, someone who were from the industry and also some who were new to the business of movies. It's about getting people together with shared experiences. The risk we have in Bollywood is that we tend to do things in the same way when it comes to movies, especially in marketing. We are only four years old and have a huge heritage behind us. We are trying to create cinema that's commercial and that works. I personally believe that Bollywood has an ability to reinvent itself every four to five years and we at Fox India want to do just that with every movie we produce or acquire. We want to focus on the foundation as of now.

Now don't get me into this (laughs). I am one of those guys who is biased. But let me tell you, Slumdog Millionaire was a special film in many ways. Fox only had the film in U.S. and the only other country which had the film was India. But when I took that decision, it was a difficult one. These moments were very precious for Fox. Then comes My Name Is Khan. A very special film for us because it was that moment of time when we had just set up since a year in India and we said - We want to get into Bollywood. The task was very clear. How do we as a foreign studio demonstrate to the Bollywood community that we can add value in a manner that no one else can. I feel very vindicated that it's been now two and a half years, and while we've seen some dramatic changes in the business and its 100 crore club, but even today, My Name is Khan is way ahead of all the Hindi movies in the overseas. At this point my next favourite is Life Of Pi. Just being a part of this great spectacle was an honour.

And we really want to know about your most ambitious project - the remake of Knight And Day with Hrithik and Katrina.

We are really looking forward to work right from the scripting stage in the remake of Knight And Day. It's a scale up for us. We are hugely excited. Working with Hrithik and Katrina will be brilliant. It's such a rocking script and is completely Bollywood commercial. It's just the germ of the idea we've taken from the original. It's a young, contemporary, caper film which hasn't been done. Hrithik and Katrina have a great chemistry in this film you've never seen the lead pair have before in a Hindi film.

Click here to read Part 1 of interview with Vijay Singh