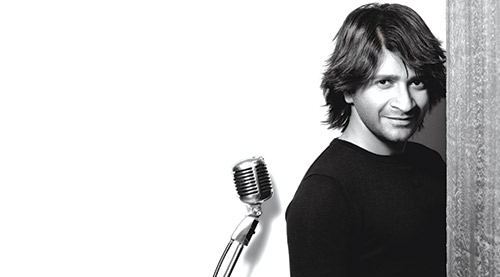 Ever since he hit it big, KK aka Krishnakumar Kunnath has shown that he is different from the crowd. Believing absolutely in few but fabulous songs all through, he has strode the industries of Mumbai and the South like the monumental talent that he is.

Starting out in the mid-'90s with Vishal Bhardwaj's Maachis in Mumbai and A.R. Rahman's Kadhal Desam in the South, he soon ruled the ad world with thousands of jingles. He got his true film breakthrough with 'Tadap Tadap Ke' from Ismail Darbar's Hum Dil De Chuke Sanam.

Like another choosy singer, the legendary Mukesh, before him, KK has a spectacular hit percentage and crazy fans who consider his exclusive choosiness and soulful, versatile singing to be notches above his contemporaries. And with so many colleagues and juniors being his unabashed fans, like Roopkumar Rathod, Arijit Singh and Ankit Tiwari, and Numero Uno composer Pritam stating that he can only offer KK special songs that deserve his expertise, the affable, extremely grounded yet a shade reclusive and media-shy singer has acquired the status of a veteran today despite singing for the newest names even now.

It takes weeks to meet him, but the fruits of patience are always proverbially sweet. Here's chatting up with the man whose recent triumphs include 'Yaara' (Roy), 'Dil Tod Ke' (Ishq Ke Parinde) and 'Kabhi Aaine Pe Likha Tujhe' (Hate Story 2).

How does it feel to have reached where you have?
(Laughs) I recall coming down to Mumbai only to make independent music. I was not at all fond of film music then, but when I got jingles, I thought they were not so bad! That led to film offers in Telugu and Tamil and also Maachis with Vishal Bhardwaj.

Then in '99, my first album Pal released and became a big hit, and I was the happiest guy! In the same year came Hum Dil De Chuke Sanam, for which Ismail Darbar wanted me. And then after these, a whole space opened up. I suddenly realized that all the good songs I was getting for composers like Anu Malik, Sandesh Shandilya, Mithoon, M.M. Kreem and many more was giving me a wider exposure and understanding of music.

And now I find 16 years have elapsed doing all this! Yes, I have not sung too many songs, so I am not fatigued.

Why are you so picky?
I don't know, I guess it's in my nature! I have always been reluctant to do too many things. Thankfully, those few songs worked. I also did not feel the need to do another album after Pal for a long while. Then in 2005-2006, I began to feel a bit restless and so I came up with my next album Humsafar in 2008!

Why are you so low-profile, a shade too low-profile when inferior singers stay in the news?
(Laughs again) I could never hammer myself or my songs right from the beginning! I also cannot attune to the concept that a singer's face must be prominently seen. A singer must be heard!

Do you still do jingles?
No, I stopped in '99. And then my shows started. I guess I have not done too badly! (Smiles)

What is your take on the music scene today?
There are a lot of fresh voices, all enthusiastic and charged. I really like Neeti Mohan, Shalmali Kholgade, Benny Dayal and Arijit Singh. Today, openings are easy and anybody can create a melody and become a composer. This in a way is good, like the scene abroad, but the sad part here is that there are so many singers, but just one well-known stage-film music. Everyone gets into films, or wants to do so.

We have clones of Sonu and you already, which happened with the legends after decades!
They are not clones, but they all have or develop the same kind of throw and everyone feels that is what works!

So many new male singers sing in the same husky, edgy way and you sang 'Yaara' for Ankit Tiwari in this same way in Roy!
I guess they feel that it conveys sensuousness! Yes, I do not overstep my brief when a composer uses my voice. I do what he wants me to do.

What about your original goal-now that the scene is opening up?
Yes, I can get back now to what I originally wanted to do, while remaining a singer for films! I can now look for personal artistic satisfaction. I am financially secure now, have a nice fan base, and because I have always sung less, I have much more time to work as an independent musician. I am definitely looking at a specific direction.

As a jingle and film singer, it was first a job, but I later began to enjoy it. But the artiste in me is still waiting within to do my own thing my own way, and I look at him once in a while! And I have to open doors for others as well. I have to do lots more.

Like films helped, surely shows must have done something for KK as well.
Of course! I am emotionally moved by my fans, on social media or otherwise. When you perform live, you realize what you have achieved, especially since as in my case, I have been an introvert. The responsibility increases.

You put in a rare kind of feel and soul in your songs. What is the secret?
(Grins) I think that most singers today are in a hurry. I prefer to relax, and love dubbing post-lunch. I slowly start understanding the song, the words, the tune, and enjoy the song. The longer I take, the deeper I go. I am honest when I feel a specific song is not my trip. But when it is, I wait till the song starts talking to me.