Janhvi Kapoor, daughter of Boney Kapoor and late actress Sridevi, is all set to enter the big world of films this July with Dhadak. The film marks the debut of the actress opposite newbie Ishaan Khatter. The film, which is an adaptation of Marathi film Sairat, will revolve around the forbidden love story of their characters. At the trailer release on June 11, Janhvi was visibly nervous but excited about her debut film's trailer launch. But, the absence of her mother, Sridevi, was felt by everyone including Janhvi and Khushi Kapoor. 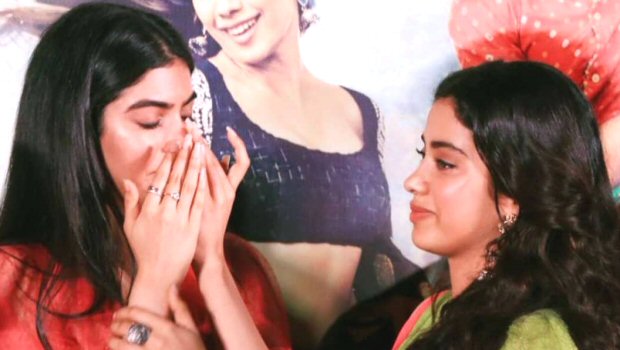 As another Kapoor daughter is making her way to Bollywood, many of the family members came to support Janhvi Kapoor. Along with Boney Kapoor and Khushi Kapoor, Anil Kapoor, Harshvardhan Kapoor, Mohit Marwah, Sanjay Kapoor, Maheep Kapoor, Shanaya Kapoor, Jahaan Kapoor and Antara Motiwala were in attendance to support Janhvi on her big day. “I definitely miss her today,” an emotional Janhvi said at the trailer launch. Janhvi's family came on stage to greet her when cameras caught her little sister Khushi in tears. The teenager was visibly emotional at the trailer launch as Janhvi consoled her with hugs and wiped her tears.

Speaking about watching Sairat with Sridevi, Janhvi said, ”I saw Sairat with mom at home and I remember telling her ‘I wish that this was my first film and I could do something like it.’ Me and mom had this big discussion how even she wanted a role like this for me and then you (Karan) called and it happened."

Produced by Dharma Productions and Zee Studios, Dhadak is directed by Shashank Khaitan and set to release on July 20, 2018.

Also Read: Dhadak Trailer: Here’s what Karan Johar has to say about nepotism and launching Ishaan Khatter and Janhvi Kapoor