Kartik Aaryan has kickstarted shooting for his new film Dhamaka helmed by Ram Madhvani and the actor has surprised everyone with his new intense look. Kartik is leaving no stone unturned for his next as he shoots in Mumbai for the thriller-drama. 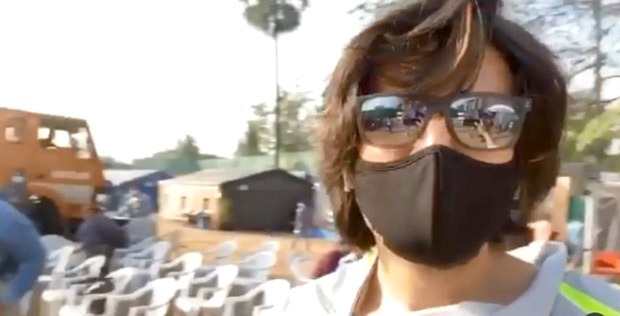 Kartik Aaryan shares a glimpse from the shooting of Dhamaka, watch video

Today, Kartik took to his social media profile to share a video from the set of Dhamaka and gave us a glimpse of his shoot-life amidst the pandemic. He gives us a tour of the set through his short video, where we see lavish prep for the shoot on an open ground area, Kartik and other crew members with mask-on to ensure safety, and the obvious loud sounds of the helicopter in the background. Looks like the actor is shooting for some high-octane scene for the movie and hence the helicopters are required on the set. The actor captions the video saying, "#ArjunPathak on set #Dhamaka. The helicopters are camera shy."

The film is reportedly a Hindi remake of the 2013 South Korean movie The Terror Live and Kartik will essay the role of a journalist. Based completely in Mumbai, the film will be produced by Ronnie Screwvala’s RSVP and Ram Madhvani Films (with co-producer Amita Madhvani).

The Terror Live revolved around popular news journalist Yoon Young-Hwa but due to an unsavory incident works now as a radio show host. One day, a listener calls the radio program and states that "I will blow up the Mapodaegyo Bridge." At first, the call is taken as a joke, but soon they realize it is real. The incident is then broadcast live on TV for the next 90 minutes. Yoon Young-Hwa believes this incident is his chance to get back to become a news journalist again.

ALSO READ: Kartik Aaryan releases the teaser of his music video ‘Nachunga Aise’ which sees him in his digital avatar