Last Updated 04.12.2022 | 1:16 PM IST
feedback language
follow us on
Bollywood Hungama » News » Bollywood Features News » The Kapil Sharma Show: Salman Khan reveals about the time when he was thrown out of the classroom

This weekend on Sony Entertainment Television’s comedy show, The Kapil Sharma Show, viewers will see the superstar of Bollywood industry, Salman Khan along with the beautiful and gorgeous looking Katrina Kaif grace the sets. The most famous, popular and loved couple of the film industry will be coming together for the promotion of their upcoming film Bharat and have a good laughing session with Kapil Sharma on the show. Making a ‘dhamakedaar’ entry, Salman Khan will be seen entering on a bike on his most popular song, ‘Slow Motion’. With so much spunk and energy, the weekend watch is definitely going to be an entertaining one. While talking about everything from films to personal lives and incidents, Salman Khan revealed some interesting information about his dear father, Salim Khan which also involved the Father of his school. 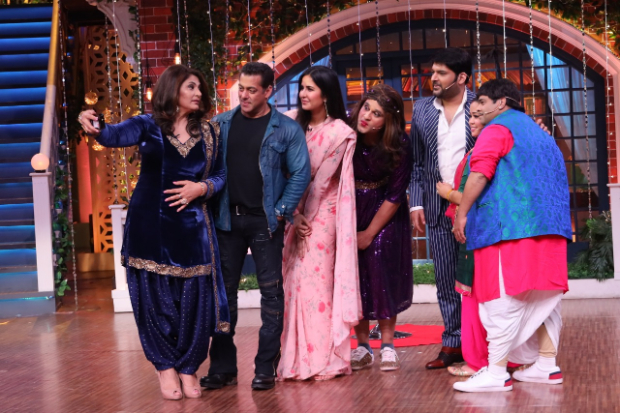 The Kapil Sharma Show: Salman Khan reveals about the time when he was thrown out of the classroom

When Kapil asked Salman to talk about one interesting memory from his childhood, Salman who broke into a giggle narrated, “I was very mischievous since childhood. When I was in the 4th standard, my teacher made me stand outside the classroom. When my father Salim Khan was passing from my school, he saw me standing outside the class room and in frustration asked me what was I up to now? To which in fear, I told him that this time, even I didn’t know the reason.”

When Salim Khan probed the matter further and questioned the Father for Salman’s punishment it was revealed that Salman’s fees were overdue. However, when Salim Khan learned about the issue, he admitted to the Father that it was not Salman’s fault but his alone. So much that he requested the Father to send Salman back to the classroom as he was ready to stand out and continue the punishment. In such an interesting turn of events, today, Salman Khan has everything in life and one can only imagine how could a star like him be punished for late payment of fees.

An inquisitive Kapil Sharma then asked Salman if the Father of the school apologized to him to which he said, “Yes, the very next day when my father paid the fees, he apologized for his rude behaviour.

Further, in the show, Salman will make a cute revelation about his nephew, niece, grandson where he said that all of them have peed on him at one point or there other.

ALSO READ: The Kapil Sharma Show: Salman Khan reveals why he was SCOLDED by Salim Khan