Readers would be aware that Boney Kapoor and Janhvi Kapoor are coming together for the first time in the film Mili. The film features the actress in the leading actress whereas her father is producing it. The duo recently appeared on the popular comedy chat show The Kapil Sharma Show which airs on Sony Television. While the show is known for its fun segments, during one of the conversations with the host Kapil, Boney went a step ahead in revealing details about his daughter which left the latter quite embarrassed. 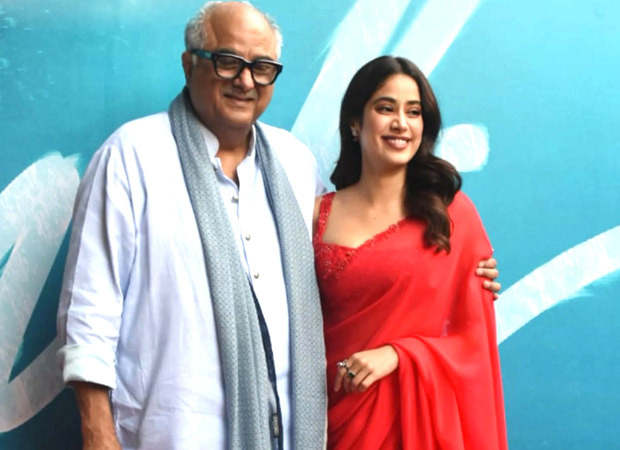 Boney Kapoor was seen discussing the toilet habits of his daughter Janhvi Kapoor and how she is often pampered by him. He also opened up about how he often arranges and organizes her things. He said, “Iske kamre mein jab subah jaata hoon, toh kapde bikhre hote hain, toothpaste khula pada hota hai. Mujhe jaake bandh karni padti hai. Thankfully, flush khud kar leti hai. (When I go to her room in the morning, her clothes are all over the place, toothpaste cap is often left open. I have to go and close it. Thankfully, she flushes the toilet on her own.)” His revelation left Janhvi rather embarrassed as she shrieked ‘Papa’, also in an attempt to stop him from blurting out any more of her secrets.

Talking about her upcoming film Mili, Janhvi Kapoor will be seen in the role of a waiter who works in a food chain franchise. The film is a remake of the Malayalam survival drama Helen and will the actress trapped in a cold freezer and how she attempts to survive this situation. It also stars Sunny Kaushal and Manoj Pahwa and it is directed by Mathukutty Xavier. It is expected to release on November 4.

Also Read: Janhvi Kapoor looks beautiful in an all white salwar at the airport