We all know that comedian turned actor Kapil Sharma is on a social media detox. After his much talked abrupt exit from his last show Family Time With Kapil Sharma, he decided to stay off social media and revealed about his decision to his fans. Once he shared the post about his sabbatical from these platforms, it was being reported that he has decided to go on a vacay with his fiancé. And now yet another picture surfaced on social media which was posted by one of his fan clubs and the said image featured him along with his dog Cheeku. 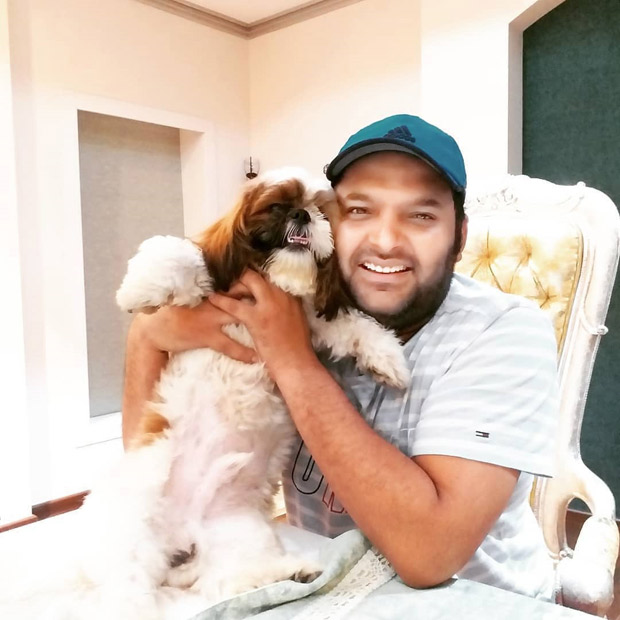 While Kapil Sharma announced about staying away from the social media platforms, he also informed that he will be concentrating on his health. This also included his battle with reducing weight and also dealing with his other health issues. When Kapil was snapped at Mumbai airport recently as he was leaving for Amsterdam, his picture garnered much attention owing to his avatar. The comedian had put on oodles of weight and looked quite unrecognizable.

Also, later, he was snapped in Amsterdam. Even though Kapil isn’t on social media, his pictures often do the rounds on these platforms. So, during the said trip, the comedian was seen on the CCTV of a certain supermarket in the location. In this picture too, he appeared to be quite different than his usual self, leaving his fans worried!

And now, the latest picture too features Kapil Sharma in the same look. Although he is all smiles as he poses with his dog Cheeku, the comedian turned actor definitely looks tired. From what we hear, his fans have been expressing concerns over Sharma’s health.

On the other hand, it is yet to be seen as to when the comedian turned actor will be resuming work. The channel officials had earlier maintained that they would always be supportive of Kapil and would love to have him back whenever he is ready to come back to work!

Also Read: Kapil Sharma returns with a new comedy show and his new format is all about loving the family