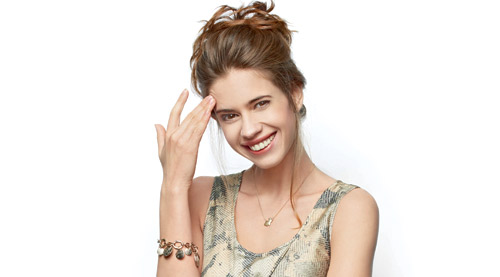 Kalki Koechlin who is seen in a stunning paraplegic avatar in Shonali Bose's Margarita With A Straw is shown to share a lesbian relationship with a woman friend played by the lovely newcomer Sayani Gupta.


The film is all set for its first screening on Sunday at the Toronto Film Festival.


On the eve of her departure Kalki expressed her "complete comfort level" in expressing same-sex intimacy with a fellow female actor. She also wondered if the censor board would be able to handle the content.


Indian cinema is not a stranger to lesbian liaisons. Shabana Azmi and Nandita Das played lesbians in Deepa Mehta's Fire. More recently in the ambitious television serial Yudh starlet Mona Vasu was seen getting too close for comfort with another actress to get vital corporate information.


Margarita With A Straw is directed by Shonali Bose the award-winning director of Amu, the film based on the 1984 anti-Sikh riots. Shonali is the wife of the Chittagong director Bedabrata Pain. In September 2010 the couple lost their elder son to a ghastly tragedy.


The film appears to be a manifestation of the director's will to overcome unbearable adversity. The film's title Margarita With A Straw referring to the cocktail drink, suggests the immobilized wheelchair bound girl's determination to have fun in life.


Kalki had to prepare for months for the part, and that included visiting a disability centre for a period of time.


Says Kalki, "I worked hard to give it my best shot. It's been tough work getting right the physicality of the character with Cerebral Palsy. I worked for six months at a centre for disability in Bandra (Mumbai) called Adapt."


Kalki worked closely with a person suffering from Cerebral Palsy. "She is a lady named Malini Chib-Alur. She is one the prominent members of the disability centre. She has Cerebral Palsy."


The film was shot in Delhi. Besides Kalki, the film features the renowned Tamil actress Revathy and the newcomer Sayani Gupta. Kalki and Sayani are real-life friends. They have recently toured the country with their play Trivial Disasters.