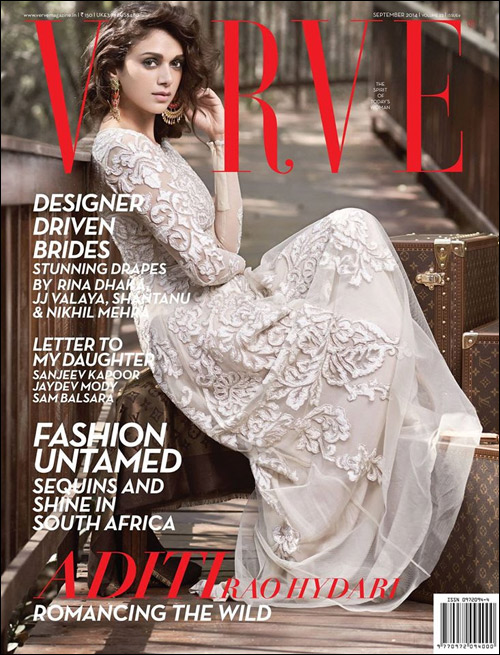 She may be busy with films but Aditi Rao Hydari's style files always speak for itself. While her public appearances often grab eyeballs for its trendy look, this princess hailing from a royal family has often been a cover girl for some well known glossies. The actress was recently seen as the cover girl for the stylish magazine Verve in its September edition.

This special bridal edition features Aditi Rao Hydari posing along with Louis Vuitton luggage surrounded by nature for the cover. Aditi is seen dressed in a white embroidered Varun Bahl gown and adding a pop of colour is the fusion earrings. Light make-up and messy hair completed her look. Titled as 'Aditi Rao Hydari romancing the wild', the magazine stated about the cover saying, "From demure newbie to spunky dynamo, Aditi Rao Hydari exhibits her adventurous streak in a South African National Park as she graces our September bridal issue."

Aditi Rao Hydari started her career in Bollywood with unconventional films like Yeh Saali Zindagi and later was seen in commercial films like London, Paris, New York and Murder 3. The actress is currently busy wrapping films like The Legend of Michael Mishra with Arshad Warsi, Boman Irani and Kayoze Irani along with Guddu Rangeela which again stars Arshad Warsi and also Amit Sadh. Rumours have it that the actress will be seen playing the role of Chandramukhi in Sudhir Mishra's contemporary version of 'Devdas'.

Apart from giving a glimpse into Aditi Rao Hydari's life, her career and lots more, the magazine also explores the bridal collection of some stunning designers like Rina Dhaka, JJ Valaya, Shantanu & Nikhil Mehra. Claiming to be the perfect bride guide, it also talks about trending fashion in South Africa among others.