Varun Dhawan, who received a great response to his recent release Shoojit Sircar's October, began his birthday celebrations on the sets of Abhishek Varman's Kalank. The actor has already started shooting for his next and celebrated his birthday on the sets with co-star and close friend, Alia Bhatt. 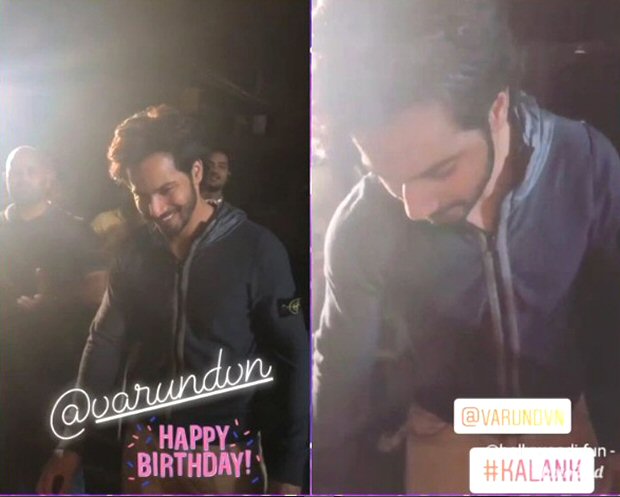 Varun Dhawan, who turned 31, says age is just a number and it's the state of mind matters. During the shoot, the cast and crew surprised the birthday boy with a cake. Alia shared a video of Varun cutting his birthday cake as they indulged in some cute banter. In the video, Alia asked ‘VD’ about turning 31. To which he responded, “I am 16.”

Talking about his birthday plans, Varun had said earlier, "Birthdays do make me happy, but I am absolutely cool about it. I feel my birthdays are more special to other people. I had to wake up at 7 am to shoot a big scene with Alia today. So, I don't think I can celebrate a lot.

On working with Alia Bhatt for the fourth time, Varun recently said, "Kalank is very special for Karan's production house, as it has been in the making since 2004. It was important for us to choose the right film to come back as a pair. People expect a lot from us."

Kalank marks the fourth collaboration between Alia Bhatt and Varun Dhawan. They made their debut in Dharma Productions' Student of the Year in 2012. Since then, they have starred in romance dramas- Humpty Sharma Ki Dulhania and Badrinath Ki Dulhania. Kalank marks the reunion of the 80s on-screen pair Madhuri Dixit and Sanjay Dutt. The other stars include Alia Bhatt, Varun Dhawan, Sonakshi Sinha, Aditya Roy Kapur! The film, which was incepted 15 years ago by Karan Johar and his dad Yash Johar, has found its way. It will now release on April 19, 2019.