Alia Bhatt and Varun Dhawan just wrapped up Kalank and we got treated to a whole lot of leaked videos, pictures and candid snaps with the whole unit of this ambitious period film. The movie has a bevy of Bollywood stars starting from Alia Bhatt, Varun Dhawan, Sonakshi Sinha, Aditya Roy Kapur and most awaited Jodi of all: Sanjay Dutt and Madhuri Dixit! Guess, Varun and Alia's schedule is over since they started shooting for a while. The two shared many pics with their team on the last day of the shoot after which Varun promptly got his long locks cut only to begin the prep for ABCD 3 with Shraddha Kapoor! A black and white picture of Varun and Alia was shared by the two talented actors marking the wrap of the movie. 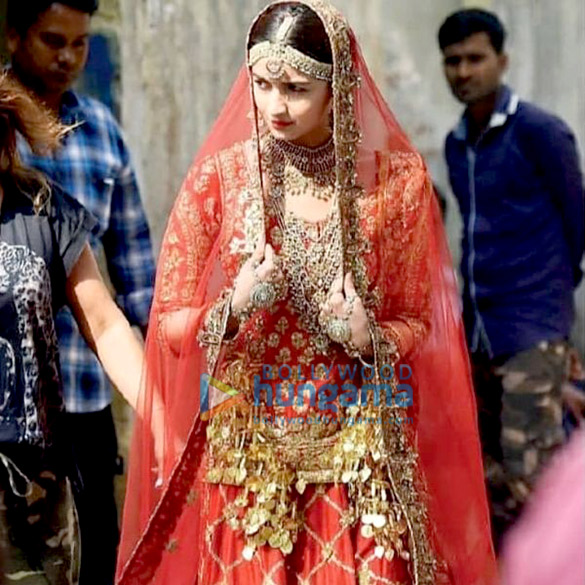 Also, a video of Alia dancing in a lehenga got viral over the weekend. Now, we have our hands on a picture which depicts Alia Bhatt as a typical traditional bride complete with red lehenga, kaleeras and a matching dupatta. Needless to say, she looks breathtaking. We know that the movie is based in the period of 1940 and is set majorly in Pakistan. No wonder, Alia has been portrayed as a traditional bride from the North from pre-partition, at the time when India and Pakistan were one country.

Alia Bhatt has an interesting line up of projects. She will be seen in Brahmastra with beau Ranbir Kapoor. She also has a very interesting role in Takht which again is a multi starrer. Her glimpse from the Ranveer Singh starrer Gully Boy trailer is also earning her a lot of appreciation.