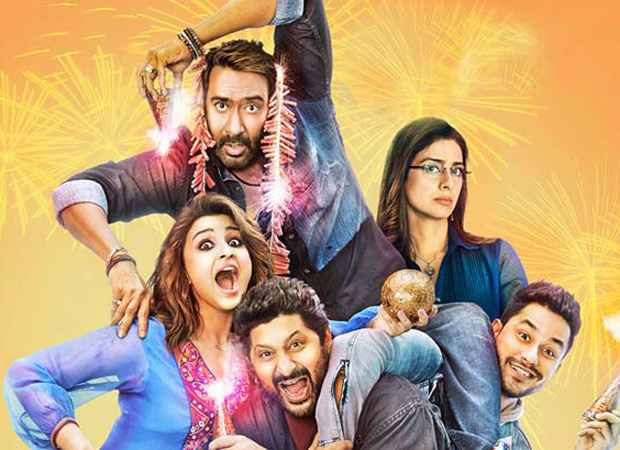 Diwali is just a few days away and the trade is hoping that the festival will prove profitable to the industry, thanks to Golmaal Again. It is the big release of the season and its trailer has upped the excitement levels for the film. Starring Ajay Devgn, Parineeti Chopra, Arshad Warsi, Tabu, Tusshar Kapoor, Kunal Kemmu and Shreyas Talpade, this comic caper releases on Friday October 20, a day after Diwali that is a holiday. In the past, films like Happy New Year and Prem Ratan Dhan Payo did great business when it released on this day and then went on to perform very well at the box office. The trade is confident that Golmaal Again is also at a similar advantage. The experts also feel that the success of another mindless entertainer Judwaa 2 has given them the confidence that Golmaal Again is a safe proposition.

Leading distributor Rajesh Thadani said, “Golmaal Again looks very good and seems like a nice comedy film. Moreover, it’s the period of Diwali and it’s a period of holidays. The success of Judwaa 2 has proved that people are excited for comedy films. So I am sure it’ll do well.” Trade expert Komal Nahta briefly stated, “I love the trailer of Golmaal Again and I am very excited.” He believed that the horror comedy combo can be quite interesting for the audiences.”

Girish Johar, film trade and business analyst said, “Judwaa 2 also had a good start. Golmaal Again is a big-ticket entertainer and such films will always be lapped up by public. They want to be entertained, period. Golmaal Again hence is the apt release this Diwali. People love to take their kids and watch such films on the big screen. If the film is well made as it looks from the promotions and matches with the expectations, it is sure to bring up huge numbers at the box office.”

Even trade analyst Atul Mohan gave a similar view. He said, “Golmaal Again is a part of a successful franchise. Rohit Shetty became so big thanks to this series, after all. And if a mindless comedy like Judwaa 2 can work at the box office, then why not Golmaal Again? Moreover, Judwaa 2 was a solo-hero film. This one has an ensemble cast and I am sure they must have put extra effort in this one to entertain the audiences.”

Trade analyst Taran Adarsh meanwhile explained, “Golmaal is a big brand and Golmaal Again has both horror and comedy. I am a fan of both and I am looking forward to see what they have made this time. The Ajay Devgn-Rohit Shetty combo is highly successful. Also, it’s releasing during Diwali time which is when people want to go out and celebrate. However, the makers must ensure that content-wise, Golmaal Again goes beyond the first three parts.”

Ajay Devgn’s biggest opening day grosser was Singham Returns that opened at Rs. 32.09 crore. So can Golmaal Again cross this figure? This is where the experts differed. Secret Superstar also releases on Diwali and that’s a niche film but it’s backed by Aamir Khan. Hence, there’s a chance that it might make a small dent in Golmaal Again’s collections. Rajesh Thadani however said, “There’s a possibility. I won’t be surprised if Golmaal Again emerges as Ajay Devgn’s biggest opener.” Harveen Singh, distributor from Rajasthan, views were similar too, “It’s releasing on the day after Diwali and hence definitely has the chance of opening bigger than Singham Returns. That film came three years ago. In these three years, the ticket prices have increased and also the number of screens has gone up.”

But Girish Johar disagreed and he said, “I doubt if it can cross Singham Returns’ figures as Aamir Khan’s Secret Superstar is also releasing during Diwali. But in terms of eventual lifetime collections, it can surely emerge as the biggest grosser of Ajay Devgn.” Atul Mohan agreed with Girish but is sure that the opening will bring cheer for the trade. He opined, “Golmaal Again’s opening will be one of the biggest of this year. I think it can have around Rs. 20 crore plus opening.” Taran Adarsh meanwhile stated, “It is difficult to say if it will be the biggest opener of Ajay Devgn due to Secret Superstar.”

Whether or not it emerges as biggest grosser of Ajay Devgn, one thing is for sure – Golmaal Again is set to put a smile on the faces of all – the producers, distributors, exhibitors and above all, the audiences!