In the most tragic news, LA Lakers' basketball superstar Kobe Bryant passed away in a tragic helicopter crash on Sunday, January 26 in Calabasas. TMZ Sports confirmed that Kobe along with his 13-year-old daughter Gianna died in the crash. Their friends and pilot also did not survive the tragic crash of their private helicopter. 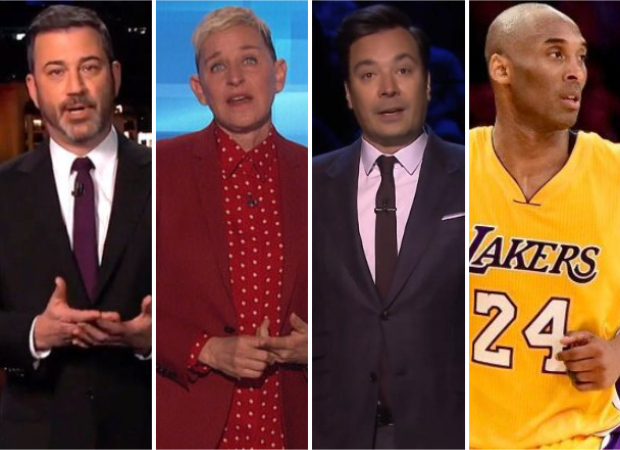 The talk show hosts Jimmy Kimmel, Ellen Degeneres, Jimmy Fallon were in tears while addressing the death of Kobe Bryant. But, they all shared their personal memories and even paid tribute to the legend. "Today is Monday, and yesterday was Sunday. It happened to be my birthday and the Grammy Awards. I was nominated, I didn’t win. Not the point." The host was in tears as she addressed her audience."Life is short, and it’s fragile, and we don’t know how many birthdays we have. So just– you don’t have to have a birthday to celebrate, just celebrate life. And if you haven’t told someone you love them, do it now. Do it. Tell people you love them. Call your friends. Text your friends. Hug them. Kiss them. Be nice to people at the DMV. They’re people. Be nice to them."

Reflecting on his career, she added, "Yesterday was supposed to be a celebratory day, and then we got tragic news about Kobe Bryant, and everything changed in a second. And that’s what I want to talk about. As you all know, it was a very tough weekend in Los Angeles, there was a helicopter accident that took the lives of nine people aboard including Kobe Bryant his 13-year-old daughter Gianna. Kobe was a legend for what he accomplished on the basketball court, but also his kindness and the times that he helped us give back to deserving people on our show."

Jimmy Kimmel decided to not have a studio audience during Monday's taping. Kimmel said, "Tonight's show is going to be different from our usual show. We don't have a studio audience here tonight because going forward with a comedy show didn't feel right considering what happened yesterday. Kobe was, and I know this might not make sense, but he was just the last person you could ever imagine something like this happening to. But Kobe was a hero in the way Superman is a hero. He was so big, it was almost like he was a fictional character. He was a real-life superhero with a costume and everything walking amongst us." He further added, "He always came through, he always showed up to save the day.'

"As an athlete, he was incredibly gifted, more than almost anyone. He was talented beyond reasoning. Yet he worked harder than everyone. He worked harder than people with much less talent than he had. He took his job and his pursuit of excellence so seriously. He was completely dedicated to being as good as he possibly could be, which is inspiring to anyone who does anything, and we loved him because of that. But we also loved him because he was ours. We watched him grow up here. He came to LA when he was a teenager and, unlike almost every other superstar athlete, he never left. In his 20-year career, he only wore two uniforms, for the Lakers and for the United States Olympic Team. There were times when it seemed like he would leave, but he didn't. He stayed until the end. And he's someone almost everyone in the city loved and not just Lakes fans. Everyone would light up when they saw him. I saw it many times. He was special. He was a special person. A great basketball player, for sure, but more than that. He had so many interests outside of sports. He was intensely curious. He would call people he admired to interview them. Business leaders, writers, inventors. He was always learning, always improving. He had a hunger for that," he dedicated a 40-minute episode for Kobe.

Another host who was emotional during their monologue was Jimmy Fallon. Holding back his tears, he reminisced about the first time he met Kobe. “Kobe was such a life force, so strong, creative and inspired that in my head, I thought that he was going to live forever,” the Tonight Show host explained. Fallon, then a 21-year-old stand-up comedian, met Bryant when he was 17 years old and went to Pink Dot. “We saved the party, we said goodnight, and, of course, Kobe went on to be a legend,” Fallon said, choking up. “When we’d run into each other over the years, we’d laugh about that night that we first met.” Concluded Fallon, “Kobe, when we meet again, we’re going on a beer run.”This news has left everyone in shock as Kobe Bryant was 41 years old, survived by his wife Vanessa and four daughters. He was a five-time NBA champion during his 20 years with the Los Angeles Lakers, 18-time All Star, two-time NBA finals Most Valuable Player (MVP), and named the NBA’s MVP in 2008.

SuperM enthralls the audience while…

Ewan McGregor says he watched The…