Janhvi Kapoor is back from her girls trip to Mussoorie and is back to completing her work commitments. Ever since Janhvi Kapoor made her debut with Dhadak and even before that, she has always been making headlines. Janhvi has created a place for herself in the industry with her versatility. 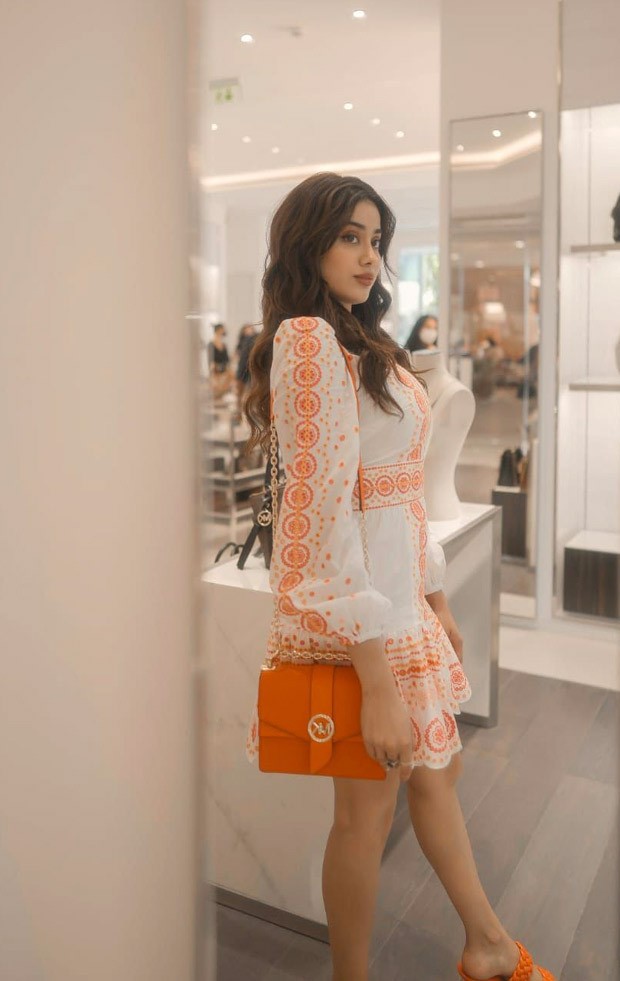 Janhvi recently attended an event in the city for Michael Kors, as she visited their Flagship Store. She stepped out wearing a billowing white dress with orange accents and embroidery. The dress featured puffy, balloon sleeves with a cinch at the waist and soft, intricate borderie work at the hem. Janhvi looked resplendent with shimmer makeup and middle parted waves in her hair with tinted lips. She completed the look with an Orange bag from Michael Kors bag. The crocodile-embossed leather Greenwich crossbody bag is the ultimate finishing touch to create a polished look. It’s designed in a structured silhouette with a sleek turn-lock closure and an adjustable gold-tone chain strap—store your phone, card case and keys in the pocketed interior. The bag is the stand out piece of Janhvi's look and costs Rs. 40,000.

Janhvi was last seen in Gunjan Saxena where she played the titular rule. After which she was seen in Roohi where she played the character of a ghost.  Meanwhile, Janhvi has been juggling work commitments-  she has completed shooting for Good Luck Jerry.  It is an adaptation of the Tamil film Kolamaavu Kokila' starring South star Nayanthara. Besides this, Janhvi also has Dostana 2 in her kitty.

Also Read: Janhvi Kapoor captivates with her million dollar smile as she dons a sparkly dress for The Big Picture