In one of the many appearances two-time Grammy-nominated BTS have been making in Los Angeles ahead of their 4 sold-out concerts, the group arrive on the sets of The Late Late Show With James Corden. But, this time things were different. BTS' leader and spokesperson RM straight away addressed the elephant in the room - 'James being in hot waters with ARMY (BTS' fanbase). 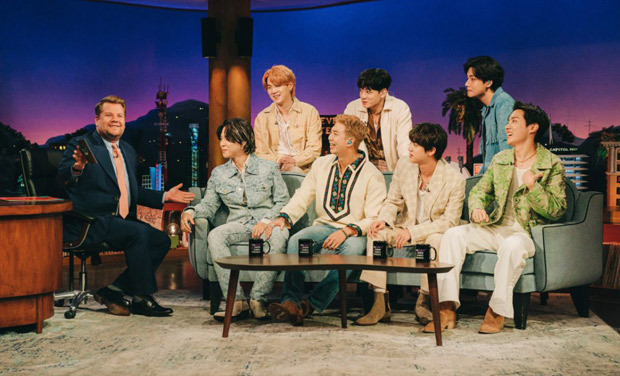 Back in September, BTS made an appearance at the United Nations General Assembly accompanying South Korea's President Moon Jae-in after being appointed as Special Envoy for Public Diplomacy. They performed 'Permission To Dance' at the UN after giving speeches in Korean. While millions were taking pride in this very moment, James Corden's jokes did not sit right with the fans. On the September 20 episode of his talk show, the British comedian poked fun at the South Korean group’s appearance at the UN citing the group being “pretty unusual visitors” and calling their diverse fandom, “15-year-old girls”.

“The United Nations General Assembly kicked off this morning in New York City, and it started with some pretty unusual visitors – BTS were there,” Corden said. “Historic moment. It actually marks the first time that 15-year-old girls everywhere found themselves wishing that they were Secretary-General António Guterres.”

Cut to the November 23rd episode which was shot in person in LA, where BTS appeared on the sets of the show. Without wasting much time, RM straight away asked him, “You've been in some hot waters with ARMYs, are you alright?” with a smile on his face. “We did two jokes, which I didn’t think were in any way offensive to anybody,” Corden explained. “This was when it went wrong when we said that your fans were 15-year-old girls which of course, isn’t true”. He further said that he considers himself “one of the biggest BTS fans on planet Earth”.

“I hope you know this, we absolutely love you and we love the entire ARMY,” Corden said. He further emphasized that the fans are “true force for good”, re-iterating that “they have supported charities that I support at home and they’re amazing The prospect of doing anything that may have upset them, I didn’t enjoy that feeling and I hope they know that we would never do that again,” Corden said.

BTS’ charming leader RM then assured Corden that it's all good stating, “It’s alright, we appreciate your apology.” At the end of the episode, BTS performed 'Permission To Dance', for the first time in front of a live studio audience.

BTS continue to venture into uncharted territory with a Best Pop Duo/Group Performance nomination for the 64th GRAMMY Awards. The achievement with their chart-topping hit 'Butter' marks the second time the septet is being considered for a GRAMMY Award, following the Best Pop Duo/Group Performance nomination in the previous year for “Dynamite.” BTS then became the first Korean pop act to receive a nomination and perform at the awards show.

Two days before the announcement, BTS capped off the 2021 American Music Awards with an ebullient performance of 'Butter' after receiving three awards including Artist of the Year. The band will soon return to the concert stage with ‘BTS PERMISSION TO DANCE ON STAGE - LA,’ set to take place at LA’s SoFi Stadium on November 27, November 28, December 1, and December 2.