Last Updated 09.12.2022 | 9:41 AM IST
feedback language
follow us on
Bollywood Hungama » News » Bollywood Features News » BTS win Artist of the Year at AMAs 2021, enthrall with performances on ‘Butter’ and ‘My Universe’ with Coldplay

They came, they performed, they conquered! It was the awards night and all eyes were on 21st-century pop icons BTS. The South Korean group flew to Los Angeles to attend and perform at American Music Awards 2021 on Sunday night which will be followed by their four LA concerts at SoFi Stadium in the coming days. It was a night full of dreams coming true, major wins, and some stunning performances. 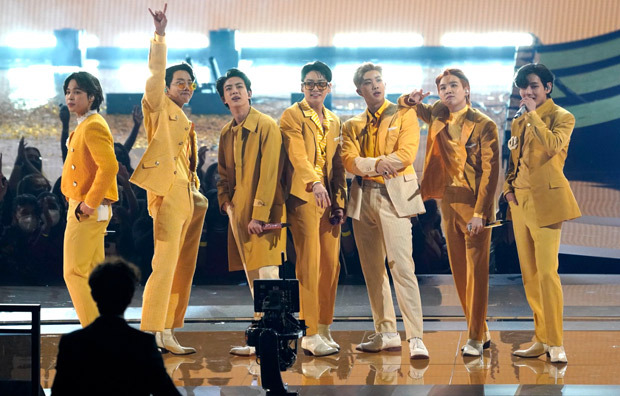 BTS win Artist of the Year at AMAs 2021, enthrall with performances on ‘Butter’ and ‘My Universe’ with Coldplay

BTS were nominated in three categories Favorite Pop Duo/Group, Favourite Pop Song for 'Butter' and Artist of the Year and made a clean sweep at the AMAs. It's been an indeed phenomenal year for BTS with back-to-back chart-topping hits, multi-million selling album, and record-breaking moments. This marked the first time a Korean artist/group ever won Artist of the Year at AMAs. It's a historic day for BTS, and their fans, ARMY! Upon winning the main award of the night, SUGA said, "4 years ago, we performed our debut stage at AMAs for the first time, had no idea we'd receive the Artist of The Year Award like this and all of this (happened) because of ARMY! Thank you ARMY!"

RM, leader of BTS, said, “Nobody could have bet on us standing here today, except for ARMYs. 7 boys from Korea united by love and music, and the love supported by ARMYs all over the world, this whole thing is a miracle. I wanna give this honor to u guys.”

ARMY! ???? You did it! You voted and @BTS_twt is the #AMAs Artist of The Year! Congrats! ???? #BTSxAMAs pic.twitter.com/wJ6NDQgHbo

“We wanted to make people happy with our music, we believe that this award opens the beginning of our new chapter. In the past few years, we learned that each and every moment is precious,” added Jungkook. V further said, “I am deeply touched by this award. I so appreciate your love. Thank you ARMYs, Thank you AMAs, Thank you, We purple you!”

Upon receiving Favorite Pop Song award for 'Butter', RM said, “Butter has received so much love this year. All we wanted to do is put out positive energy despite these hard times. This award truly proves that this song reaches many people’s hearts. We’ll never take it for granted. Thank you so much.” Jimin added, “Thank you ARMY. Thank you AMA. Thank you everyone for loving our song Butter.”

Upon winning Favorite Pop Duo/Group Award, Jin thanked the fans by saying, “This is all possible thanks to ARMY. You’re our universe”

BTS performed their first set with the legendary band Coldplay on their collaboration 'My Universe' from the latter's album Music of the Spheres. Taking over the Microsoft Theater in Los Angeles on Sunday, November 21, both the groups won millions of hearts with their live performance together for the very first time in front of an audience.

BTS have won awards at American Music Awards for four consecutive years since their first prize in 2018, including Favorite Social Artist and Tour of the Year. This year’s accomplishments mark the first time the band has received Favorite Pop Song and Artist of the Year, the top prize of the awards show.

Closing the night as three American Music Award winners including Artist of the Year, BTS looked dapper in yellow suits crooning to their song 'Butter'. The group was to perform their remix version with Megan Thee Stallion but the latter had to pull out from the show due to personal reasons. However, the group went ahead with the original version and enthralled the audience with their charisma and strong stage presence.

It was music's biggest night and a huge one for BTS, indeed.

BTS is soon set to return to the concert stage after a record-breaking night. ‘BTS PERMISSION TO DANCE ON STAGE - LA,’ their first offline concert since 2019, will take place at LA’s SoFi Stadium on November 27, November 28, December 1, and December 2.