Last Updated 27.11.2021 | 11:37 AM IST
feedback language
follow us on
Bollywood Hungama » News » Bollywood Features News » Ishaan Khatter is in awe of Tabu in the first look of A Suitable Boy

Ishaan Khatter took his Instagram handle to share the first look of his upcoming film A Suitable Boy. The picture features him along with co-star Tabu. Ishaan is seen sporting a moustache as the two actors are sitting on a porch swing. 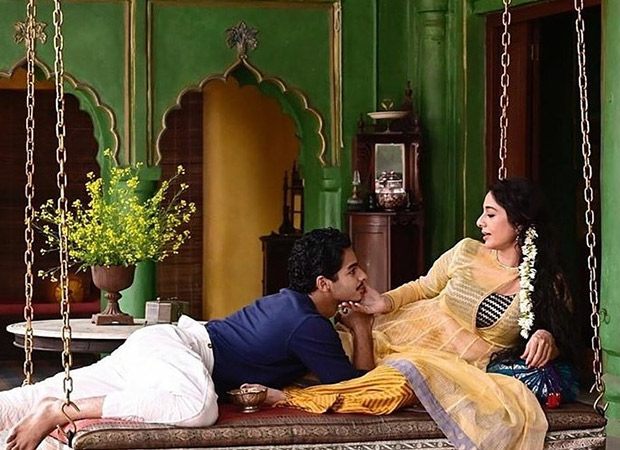 Sharing the image, Ishaan wrote, "A Suitable Boy...first look" Celebrities from the film industry poured in compliments for the first look. Karan Johar, Tara Sutaria, and Ayushmann Khurrana, among others, lauded the first still of A Suitable Boy.

Ishaan, in the film, will be playing Maan Kapoor, a young and free-spirited boy who gradually gets into a notional conflict with his politician father.  Ishaan’s character develops an attraction to the beautiful courtesan Saaeda Bai (essayed by Tabu).  ‘It’s not only my pleasure but an honour to be working on this illustrious material alongside such distinguished artists and technicians led by the indomitable Mira Nair. I hope I can satisfy her vision and give the global audience the character they deserve in Maan,’ he wrote, when he announced the film in August this year. Tabu, on the other hand, earlier collaborated with Mira Nair for The Namesake.

The film, based on Vikram Seth’s novel with the same name, will be divided into six parts and will be distributed by BBC Studios.

Also Read:Katrina Kaif, Siddhant Chaturvedi and Ishaan Khatter to come together for a horror comedy?