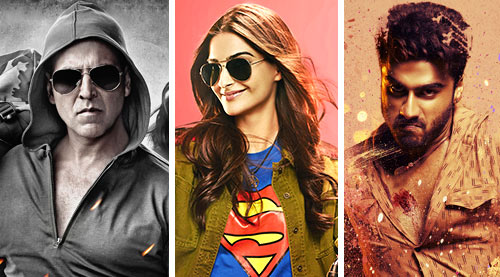 It had to happen sooner than later. With cost of filmmaking only getting accentuated due to added money spent on marketing and P & A (print and advertising),

profit margins have only gone down this year. The worst of it all, some of the 100 crore successes too haven't been clean hits. Burdened with huge peripheral costs, some being even in

the tune of 40-50 crores, the films have failed to live up to the expectations.

And to think of it, this is the fate of only big budget mega star films!

Now imagine the fate of medium budget or smaller films which have not even managed to make their presence felt, considering the fact that they ran out of money to get their film

adequate marketing. The 200 crore question is - Are we spending way too much on marketing effort, especially when 2014 has proven that audience can no more be enticed with over

the top promotion? Is it about time that we look at down South that has a model of limited promotion window as well as marketing spent? With satellite market as low too and

content taking huge hit, is it time to be creative in marketing with controlled costs?

Says filmmaker Anil Sharma, "Publicity budget of South movies is fixed; it is only in Mumbai where there is this mad race for huge marketing and advertising budgets. Only way out is

that all producers-directors-actors come together, take a decision to cut down these costs and instead work on making better films."

Of course that is something which is truly rudimentary, considering the fact that 2014 has clearly been the year of the audience, what with several sub-par films with even stars in lead

have bit the dust. The fad of even poor films scoring over the weekend has thankfully been diluted to a very good extent. Still, with filmmaking being a subjective matter, not all are

convinced to have a cap per se being identified as a quick-fix measure.

Says Vipul Shah, whose Akshay Kumar starrer Holiday stays on to be one of the most liked films of the year and turned out to be a true 100 crore entertainer, "It's every

individual's point of view on how much to spend and that comes from the belief in their work. This is so relative that no one can have a clear answer. I think it should be left to every

film producer to decide what's the right budget for the marketing. Anyways, all the films are a gamble, so let gamblers have it their way."

Of course when it comes to gambling, there are risks involved

as well. But then how does one explain those risks that are seen well in advance and have an ulterior motive attached?

"High Print & Advertisement (P&A) works very well for most studios to show fake and escalated costs to producers," says Sanjay Gupta, who is all set to bring his Aishwarya Rai

Bachchan starrer Jazbaa on floors, "Otherwise whoever said that touring the country with your entire cast will ensure footfalls in theatres? There is hardly a debate though that

the need of the hour is to control the ridiculously escalated costs around marketing."

would have content walking the talk. Says Arbaaz, "I agree, we are spending ridiculous amounts of money on film promotions, in some cases as much as the cost of the film itself.

Though visibility does help a film get noticed but it's ultimately the strength of the film that helps it sail through and not the publicity. For Dolly Ki Doli, I would try to be

innovative and cost effective. May be even try newer avenues with a better target audience."

Thankfully, more and more filmmakers believe that innovation is indeed the name of the game, and it is about time that checks and balances are indeed put into place.

Says Sanjay Kapoor, who has designed two streams of promotion for his production Tevar, one which targets multiplexes and another that aims at single screens, hence resulting

in an all around campaign, "It's never too much for marketing but then it should be done according to the budget of a film! The main thing about marketing is that the creatives should

be good in quality, and not just in quantity. Finally, the most important thing is the 'product' in itself! If the product is bad, no marketing can help! Of course, while that happens, the

cost of marketing in TV and Media should be brought down."

practically seen it and done all to understand the business well enough to know that change has to be the order of the day. Says producer Ratan Jain, who is currently making Kis

Kisko Pyaar Karoon with Abbas-Mustan as the director duo, and is soon to bring Dhadkan 2 on floors, "Yes, the promotion cost should be brought down. Today nobody is

interested in long run of a film. Everybody thinks of just the first weekend business. Needless to say, more effort should be into making better films with good content than spend

The young entrants are getting a hang of that as well. One such person is Imtiaz Ali who did join hands with Sajid Nadiadwala as a producer and came up with a cost effective

Highway that did reasonably well commercially, while also rode on the power of content. He says, "Producers should get together and put their minds into the massive P&A

costs for movies. It is making movies very expensive and crippling the growth of various kinds of films. I don't want to go blindly into P&A. I am not an expert but I am trying to learn

how to make the publicity effort count. I am going to work on it."

Rajkumar Santoshi, who has never shied away from calling a spade a spade doesn't spare the stars in the business either. Asking them tough questions about the current trend of power

games in the business, he fires away with a tangential thought, "Leave the filmmakers aside, how about our big stars too? Even they want holiday season for their films. Where is the

star power in that case? Shouldn't they be giving chance to smaller stars or films on holidays?"

On topic, he adds, "There would always be people who are insecure. Most of the films don't have content so the makers feel that if we can make noise, we can get good money over the

weekend at least because on Monday our film would anyways crash. Tab tak you can declare that our film has done 100-150-200 crore business. Marketing ka funda abhi yeh ho gaya

Well, the fad couldn't have been summed up better!