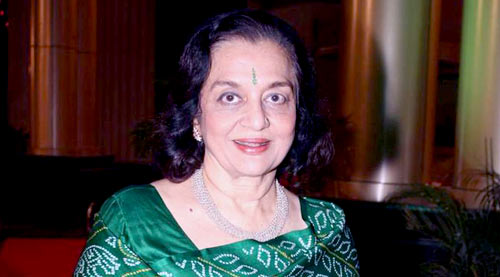 It was way back in 1966 when Vijay Anand's Teesri Manzil was released. The film turned out to be a smash success and remains popular till date. While 'O Haseena Zulfonwali Jaane Jahan' and 'Aaja Aaja Mein Hoon Pyar Tera' remain popular till date, courtesy Mohammad Rafi's exuberant singing, R.D. Burman's foot-tapping score, Majrooh Sultanpuri's catchy lyrics and of course Shammi Kapoor's dance moves, one track which continues to make for a melodic hear is Asha Bhosle's 'O Mere Sona Re Sona Re'.

Now in the 50th year anniversary of Teesri Manzil, the film's leading lady Asha Parekh has paid a tribute of sorts to the Nasir Hussain musical. The 73 year old veteran actress, who continues to make social appearances, has just made her debut on Dubsmash. The song that she chose? 'O Mere Sona Re Sona Re'.

"It was Kis Kisko Pyaar Karoon leading heroine Simran Kaur Mundi who introduced her to Dubsmash. Being a huge fan of the actress, she happened to meet her at a common friend's get together. The two clicked instantly even as they chatted merrily on many successful films that the yesteryear actress had delivered way back in the 60s and the 70s," informs our source.

For the veteran actress who had regaled audience in films like Jab Pyar Kisise Hota Hai, Phir Wohi Dil Laya Hoon, Love in Tokyo, Aaye Din Bahar Ke, Baharon Ke Sapne, Aya Sawan Jhoom Ke, Aan Milo Sajna, Caravan, Main Tulsi Tere Aangan Ki, Upkar and many more, it was a given that Teesri Manzil would be remembered quite fondly. This is when 'O Mere Sona Re Sona Re' came up in the conversation and in no time, Simran set up Dubsamsh recording for Asha Parekh, who had hung up her boots as an actress two decades back.

When contacted, Simran was elated to have met one of her favorite actresses from the era gone by. "It was surreal," says Simran, "It was quite surreal to be actually there with her in the same room. I have loved her films ever since I can remember. Also, I love this particular winged eyeliner of hers that is trademark Asha Parekh. She was so sweet and nice while we chatted on films. When I told her about Dubsmash, she was quite interested to know more. It didn't take her even a moment to strike a pose for 'O Mere Sona Re Sona Re'. I too couldn't resist the temptation of joining her for a moment."

Well, couldn't have been a better tribute to the 50 year old song that continues to find many remixes and cover versions till date.