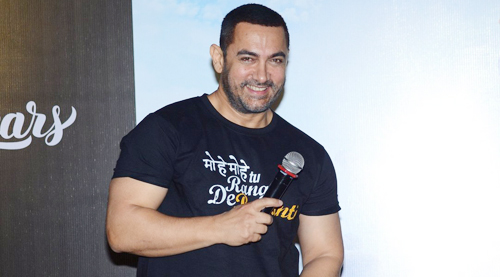 "Main India mein paida hua hoon aur maroonga bhi yahin," said Aamir Khan at the press conference to mark the ten years of Rang De Basanti at an event in Mumbai a short while back. Aamir was responding to the question on his interview on Intolerance that resulted in a massive backlash for him. "I never said that India is intolerant. My words were ruthlessly twisted and a lot of misinformation was spread," Aamir said.


An emotionally charged Aamir said that negative people tend to divide us and spread negativity. "India is one of the most unique countries where there are so many languages, cultures and the beauty of our country is its diversity. It hurts me when I see people trying to divide us. Let's not allow anyone to spread poison in the minds of people. Let's not weaken this country. I love my country. When I travel abroad within two weeks I start feeling homesick," Aamir said emotionally.


Aamir said that both he and Kiran were hurt by the hatred that came their way but he was also concerned about the hurt that some people of the country felt who didn't see his controversial interview and instead believed what was being said or the way media projected the news. "Deshdrohi bahut bada ilzaam hai. People should not believe when I say that I love my country, they should look at my actions in the last 25 years in the public life. Look at the choices of my films. I could have done any TV show but I chose to do Satyamev Jayate because I love my country and want to contribute in its improvement. I'm related to Maulana Azad sahab who's one of the greatest freedom fighters of the Indian National movement," said an emotionally charged Aamir. Prasoon Joshi jumped to Aamir's defence and said, "Aamir Khan ke kaam ko dekho. Savaal bhi nahin utthna chahiye. He has a solid body of work." Aamir on his part regretted that he shouldn't have taken Kiran's name during the interview. He also admitted that Kiran told her the same in no uncertain terms.


Earlier in the evening, director of Rang De Basanti, Rakeysh Omprakash Mehra introduced the entire team of Rang De Basanti including writers Rensil Desilva, Kamlesh Pandey, Waheeda Rahman ji, Sidharth, Sharman Joshi, Atul Kulkarni, Ronnie Screwwala and others. A documentary on the film and it's impact was launched. This documentary has been directed by Rakeysh Mehra's wife P S Bharti (also the editor of the main film). A book of screenplay was also launched which includes interviews with the starcast and other interesting vignettes. Everyone spoke in detail about a landmark film and it was extremely interesting but my only complaint was that even though Mr Mehra speaks very well, the duration of the event should have been shorter as it stretched much longer than expected.

Aamir informed that Dangal is 90% complete and now he has started the process of losing weight. He said he has to lose 25 kgs to play the younger version which will be shot in June this year. Aamir stated that he doesn't mind working with Sunny Leone if there's a project where both can work together and provided she is willing to work with him.