Ibrahim Khan is assisting filmmaker Karan Johar in his forthcoming directorial and the star kid is already garnering ample attention. Alia Bhatt even spoke about him during the first episode of Koffee With Karan 7 about working as an assistant director in Rocky Aur Rani Ki Prem Kahani which also co-stars Ranveer Singh. In a recent photograph shared by Sana Pataudi, we can see Ibrahim Khan sharing a warm pose with veteran actress Jaya Bachchan. 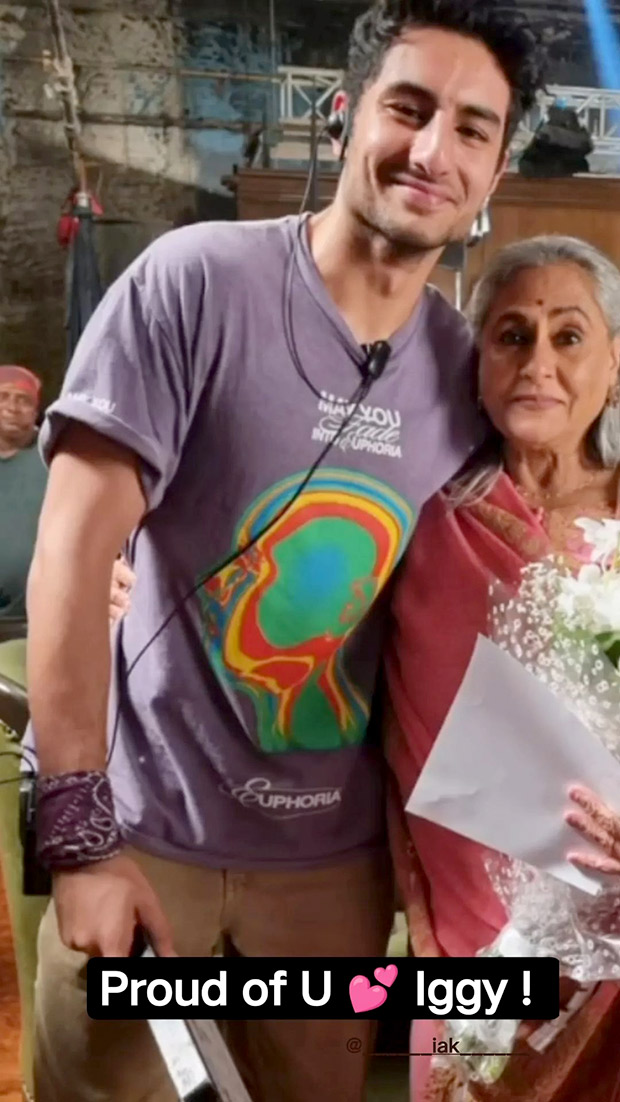 Ibrahim Khan, who might soon take his first step in Bollywood, has already kicked off work as he joined the industry as an assistant director. In Saba Pataudi’s recent post, she expressed pride over her nephew adding ‘So proud of you Iggy’. The photo features him on the sets of Rocky Aur Rani Ki Prem Kahani. Readers would be aware that just a day ago, it was revealed that the film’s shoot schedule has been wrapped up. The video featured, almost, the entire cast and crew of the film as they finished the schedule with a bang.

The wrap up bash saw lead actor Ranveer Singh also give a brief speech about Karan Johar directing him. As for the film it is expected to feature an ensemble cast of Dharmendra, Shabana Azmi, and Jaya Bachchan. It seems that these B-town veterans will be seen as parents of Rocky and Rani. On the other hand, Rani aka Alia Bhatt is busy with the promotions of Darlings. While she couldn’t attend the bash, she video called the team.

While most of the film is complete, Alia Bhatt had shared in her wrap up video that the team is yet to shoot a song which is expected to happen next year. Reports have it that the actress will soon be going on maternity leave because of which some minor changes on Rocky Aur Rani Ki Prem Kahani will be scheduled until next year.