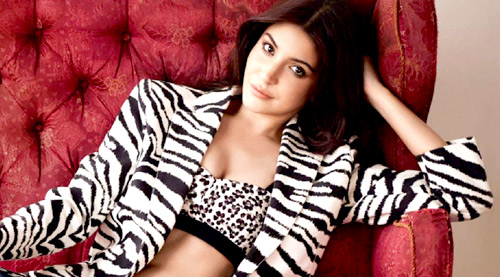 Honest, straight forward and someone who never beats around the bush - That's Anushka Sharma for you. Right from Rab Ne Bana Di Jodi to NH10, two films that have

seen Anushka exploring different spectrums of the world of acting, Anushka has remained the same as a person, even though she has showcased different facets of her talent. While being the only

actress in the triple century club (PK) and hitting a boundary with her maiden production (NH10), Anushka is now looking to scoring a hat-trick with Bombay Velvet where, in her own

words, she has internalized her performance. Over to the lady!

A film like this can't just be a director's medium because as an actor too, a lot needs to be brought on board in order to live the filmmaker's vision. How much were you involved in getting your

I had to be involved quite a lot; one has to be as an actor, especially in a film like this. I had to look like someone from that period. Whatever meetings that I had with Anurag (Kashyap), I

gathered a lot of information to make sure that it all looked real and authentic on screen. After all, Anurag has created an absolutely true atmosphere of Bombay from the 60s. Moreover, the

character of Rosy is such that I had to come up with a very internalized performance. When you watch the film, you would realize that Rosy is not saying too much in the film. Everything is with her

eyes and expressions. It is all very subtle.

That must have been tough, considering the fact that you are pretty outspoken in real as well as reel life, if your earlier films are taken into consideration?

Yes, naturally I am outspoken. Every actor has certain energy that suits her very easily. This is why when Anurag offered me this character, I was very surprised. It was way back in 2011 and I had

just come out of Band Baaja Baaraat. So I had this tag of being a Punjabi girl and I was wondering what did he see in me to be so convinced that I was right for the part. After all, the film

has a completely different look, and there is so much of restrain and control required in the performance. This is why I say that according to me this is my most internalized performance.

In the interim period you did quite a few different films like Jab Tak Hai Jaan, Ladies v/s Ricky Bahl and Matru Ki Bijlee Ka Mandola. It must have been tough to get into the mind

of a jazz singer from the 60s?

Well, for starters I had to control my natural instinct. On top of that Anurag wasn't someone who wanted me to do a lot of preparation or reading. I thought that he would be like that where he

would want all us actors to come together and do the reading. However, he just wanted us to be on the sets and play it naturally. Guess he had some confidence in my abilities to get it right out

there. So I also had a belief that 'Chalo, it's okay. If he too thinks so then it's fine'. I went with the flow.

While you shot for the film, how did you go about understanding the world of Bombay Velvet and the vision that Anurag carried?

See, with all the directors, it does take some time for sure to understand what they actually want. I gathered that every day on the job and learnt about the world created for us. When you reach

the sets, you start feeling the vibes of the 60s due to things and people around you. Apart from this, the vibe with the director is very important. In that aspect, Anurag is a very good judge; he

knows what quality is required in an actor and what are the personal traits that need to be tackled.

There were certain vibes that must have been required to be shared with Ranbir too, considering this is your first film with him. Moreover, this is not a quintessential romantic film either.

I wouldn't have wanted any other film for our first time pairing. See, a lot of people wanted us together to do a romantic film, and I am happy that Bombay Velvet turned out to be one. This

is a very strong love story and a passionate one at that. Ranbir is such a good actor and I can't imagine anyone else to be able to play the part of Johny Balraj so well. I am really happy because

we complement each other well in the film. Like I said, I don't say too much in the film while Ranbir's character is very reactive. A lot is happening in everyone's head, what with secrets and all.

We both had to make sure that the love story stood well. As for a quintessential love story, then we do start that in the August-September timeframe with Karan Johar's Ae Dil Hai