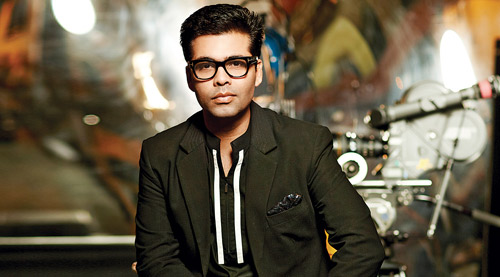 "Shah Rukh Khan is the Khan of all seasons," said Karan Johar in 'Talking Films Rapid Fire' with Faridoon Shahryar in Goa recently. If KJo is marooned on an island with Ram

Gopal Varma with his digital camera then he'd shoot Ramu's 'Posterior' as "that's what he does the most," Johar says. Enjoy this fun rapid fire segment where KJo is as frank and forthcoming as it

possibly can be. So, who can step into the shoes of Varun Dhawan, Sidharth Malhotra and Alia Bhatt if Student Of The Year part 2 is made twenty years from now? Find out for yourself:

If you wake up one day and realize you have turned into Anurag Kashyap, what would you do?

If you could go back and erase an event from your life, what would that be?

The death of my father

If you are marooned on an island with Ram Gopal Varma and his digital movie camera, how would you survive?

I would shoot his posterior because that's what he does the most.

If you are marooned on an island, who are the 2 people from the industry you would not like to be with?

Anurag Kashyap and Ranbir Kapoor, I've spent too much time with them already.

If you were a product, what would be your best punch line?

If you have to write a book on Shah Rukh Khan, Salman Khan, RGV, what would the title be?

The Khan of all seasons?

3 things that turn you on about a woman?

Her smile, her sense of humour and her fragrance.

Hrithik, Salman or John - the actor who looks best without shirt.

If there's a 20 year leap in part 2 of Student Of The Year, who would you like to see stepping into Alia-Varun-Sidharth's shoes?

Shah Rukh's son AbRam for sure. He's a cutie! Then, maybe Azad. Azad and AbRam would be lovely as the students of the year. And the girl would be Aishwarya Rai's daughter Aaradhya.

What do actors actually mean when they sayâ€¦I couldn't do the film due to date issues?

They hated the script

I would never kiss onscreen

Their boyfriend or girlfriend don't like the idea that they do

I don't make films for the 100-crore-club

Would we see Sonam-Deepika together in Season 4 of Koffee With Karan?

I hope so but it won't happen.

That would be lot of entertainment. Sonam is hugely entertaining

She is lovely and a great chat show material. But she's also very sensitive at heart. She's wonderful