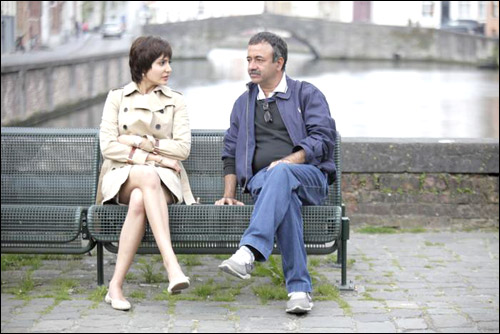 It's been a while since we saw Anushka Sharma on the silver screen, after her last release Matru Ki Bijlee Ka Mandola failed at the box office. The actress, who is known for her bubbly image will be seen in a different avatar in her upcoming film PK.


Previously, we got a glimpse of Anushka Sharma's casual look in the few pictures that were taken by fans on the sets of the film in Belgium and Mumbai. However, recently we caught hold of yet another similar picture of the actress where her new hairstyle is clearly visible. Unlike in her previous films, Anushka Sharma is seen sporting a bob hair cut in PK. She was seen wearing a beige trench coat as she was interacting with the film's director Rajkumar Hirani.


PK has been in the news since its inception and the film recently hit the news circuits as Aamir Khan was caught up in a controversy after he posed almost nude for the poster of the film. Three posters of the film have already been released and it is also said to star Sanjay Dutt, Boman Irani and Sushant Singh Rajput. While Sanjay Dutt is playing a Rajasthani, Sushant is said to play the role of Anushka's boyfriend.


Produced by Vidhu Vinod Chopra and Rajkumar Hirani in association with UTV, PK is slated to release on December 19, 2014.