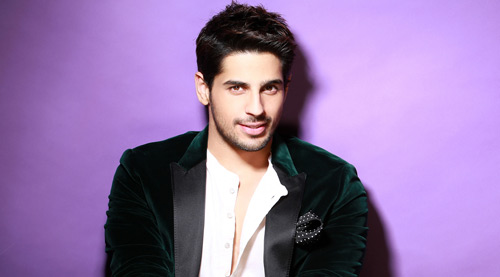 Sidharth Malhotra has been enjoying a good track record so far. Debuting with a successful Student Of The Year, he even earned a

100 crore superhit with Ek Villain. In the meanwhile, he also did Hasee Toh Phasee where he played a boy next door. Though his hard work in

Brothers didn't help the film cover much distance, his presence in the Karan Johar production was noticed for sure. Now, he is returning to the big

screen with Kapoor & Sons, and this time round, he has an altogether different characterization to boast of.

Kapoor & Sons is your fourth film with Karan Johar. Guess this is one liaison that is going to last?

Yes, of course. Everything that I have today is due to Mr. Karan Johar. This interview also that we are doing is because of him. Varun (Dhawan), Alia (Bhatt)

and I are Dharma's talent. It is a premium production house and I am ecstatic to be a part of it. They signed us up for a reason. We are happy that everyone

wants to work with Karan and because of that we are getting better and better opportunities. We are getting great content to play around while exploring

varied genres. We have to be grateful for what we are getting and I am truly respectful towards Karan Johar for making me stand where I am today.

After a rather intense Brothers, making Kapoor & Sons would have been a breeze.

(Smiles) This is the quickest film that I have done. We shot mostly in Coonoor. It is an ensemble family drama with several light hearted moments and comedy.

There was a lot of outdoor shoot involved and it was clearly one of my best ever as I was with Fawad (Khan), Alia, Rishi (Kapoor), Rajat Kapur and Ratna

Pathak Shah for an extended period. The whole crew got along really well. The whole set up was the kind where we had to bond as there were no distractions

out there. There was nothing much to do except spend time with each other.

So what exactly did you do?

There are two restaurants so we used to frequent that. Then, we also used to get the whole crew together to play cricket and poker or go out for a drive into

the tea estates. I also did horse riding. Shakun and I knew each other from the past and hence we went along quite well. As a character, it was a lot of fun

since I am being someone much lighter and softer, who by the way talks a lot (smiles). It is a special film.

How is it going on Baar Baar Dekho, your love story with Katrina Kaif?

Before starting the shoot, we did a lot of workshops and readings. It is a light hearted love story and has a fun journey to it. It spans over a period of

time and while the premise is quite interesting, it is not a film about time travel. It is not a science fiction and has nothing to do with any tales in the

future. It is predominantly a love story and how the relationships between the two characters unfold over time.