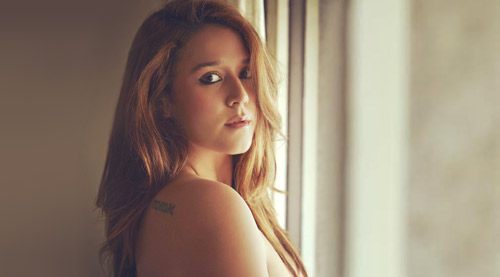 There are reports that Jackie and Ayesha Shroff's daughter Krishna has gone 'topless' in pictures that she has posted on a social network.


Far from being sleazy and far removed from "topless" the pictures are very aesthetically conceived and shot to display Krishna as potential star. Ever since those pics went viral there are rumours of Tiger's sister following her brother into an acting career.


Krishna who made an acclaimed documentary last year dismisses an acting career for herself. "I'd love to be part of Bollywood. It is such amazing industry that's given my family so much. However I am not looking at an acting career. At least not any time soon."


Says Krishna, "It was basically just a photoshoot that my best-friend and I did for fun in my bedroom with nobody to share the experience with except ourselves. My friend is a photographer who is building her portfolio to further her career. The two of us like to have fun with the camera and just shoot whatever the mood of the moment...And since I like to put up aesthetic pictures for my private Instagram page it's a win-win situation for both my photographer friend and me. As simple as that!"


While actor Jackie Shroff's first-born Tiger Shroff made his very successful debut as a leading man last year, his pretty daughter Krishna has decided to make her presence felt from behind the scenes.

Krishna Shroff completed a documentary on the trans-gender community which she shot on her own.

While the family which doesn't believe in tom-tomming its achievements tried to keep the project low-profile a friend of the Shroffs says, "Krishna is a very talented girl. She could've excelled in any field, academic or fine arts. But Krishna was very clear about what she wanted to do."

The documentary entitled Black Sheep takes a lingering but dispassionate look at the trans-gender community.

Krishna's proud mother Ayesha Shroff says, "Krishna's documentary focuses on the community's hopes and dreams and joys as opposed to the murky sordid side of their lives that keeps recurring in all discussion on the trans-gender community."

What makes Ayesha specially proud is that her daughter did the documentary on her own. "Krishna made this documentary in collaboration with her professor from her university an Indo-British lady named Reshal Shah. We are very happy with what both our children are doing."