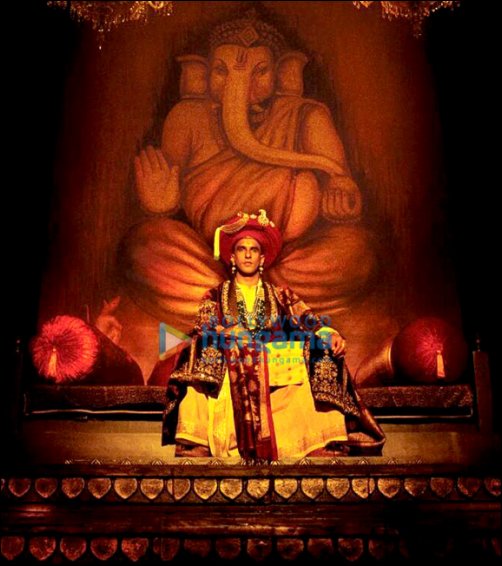 Bajirao Mastani represents an ancient era that has been created lavishly by the ambitious filmmaker Sanjay Leela Bhansali. Starring Ranveer Singh as Bajirao, we have got glimpses of the actor in the attire of this Peshwa and here's yet another look that Ranveer will sport in the film.


Being one of the last releases this year, the makers released a long teaser of the film a few months ago and now are planning to launch a song named 'Gajanana' from the film in Pune. The recently released picture has Ranveer Singh sitting on a throne and has a backdrop of Lord Ganpati (also known as Gajanana). Interestingly, the release of the song is also coinciding with the popular Hindu festival, Ganesh Chathurthi. The song in question will be launched in Bajirao's hometown Pune today.


Bajirao Mastani also stars Deepika Padukone and Priyanka Chopra in leading roles and is produced by Sanjay Leela Bhansali along with Eros International. The film is slated to release on December 18.