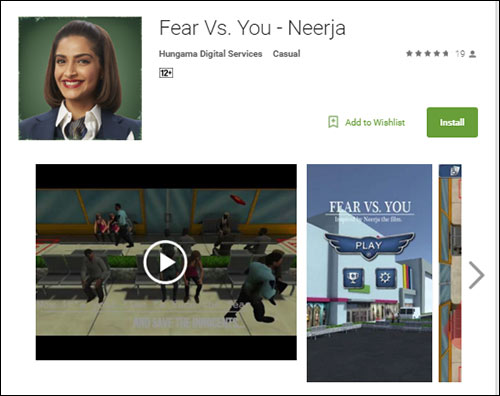 It's been just over two weeks since the release of the gripping film Neerja featuring Sonam Kapoor, and the film directed by Ram Madhvani has been doing brisk business at the

box office. Away from the film front, Hungama Digital Media Entertainment Private Limited has launched 'Fear vs you'; a strategy game with a simple one tap control while playing the game as a brave

& a spontaneous fighter. An endless game with increasing the in game difficulty as the game progresses.


'Fear vs You' is a top down 3D view game where a player will be faced with an increasingly large number of enemies in multi-environments. The primary goal of the game is to evacuate & save innocent

lives from enemy's captivity with secondary aim of the game play to collect & hide hostages ID proof from getting captured by the enemies. More the number of ID's protected, more the XP points


Vroovy is a leading Game developer, publisher, marketer and distributer of games across platforms. Headquartered in Mumbai, Vroovy is a joint venture between South Asia's largest Digital Media

Company; Hungama and India's largest game services company; Gameshastra. It currently leads the industry with its gaming portfolio spanning across diverse genres and platforms including but not

limited to Mobile and Consoles. Its recent IPs Krrish3: The Game and Don 2: On the Run, kept millions of gamers engrossed the world over. With the video and gaming industries constantly evolving,

the focus of Vroovy is not just to deliver a quality and immersive gaming experience to the Indian audience, but also to use IP and content which is contextual and relevant to the Indian gamers;


Game links as below