Actors Hrithik Roshan & Saif Ali Khan made their first outing together to promote Vikram Vedha along with directors Pushkar & Gayatri in Delhi and Gurugram, on Tuesday. Marking 3 days until the release of their film, team Vikram Vedha interacted with a lively crowd at Gurugram's SGT University. 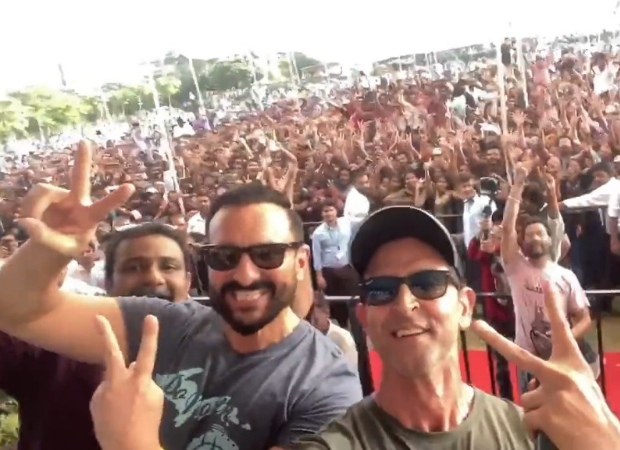 Hrithik Roshan & Saif Ali Khan made a dashing entry on stage to the theme song 'Bande', giving the audience a glimpse of the face-off between Vikram and Vedha. The Actors hugged it out as they greeted the crowds, leaving the audience cheering after seeing their off-screen camaraderie.

Hrithik and Saif come on stage together for the first time! #HrithikRoshan #SaifAliKhan #VikramVedha pic.twitter.com/fl5Zlyv5zo

The actors along with directors Pushkar & Gayatri shook a leg with fans on the stage of the SGT University.

The team also autographed an Advance booked Ticket of Vikram Vedha for a lucky member of the audience. The event was concluded with the team striking the 'Vikram Vedha pose' for a selfie with the crowd.

Thank you Gurgaon and Delhi for giving #VikramVedha the platform to come together for the first time offscreen! Thank you for being so generous in sharing your love ????????????#SaifAliKhan @PushkarGayatri pic.twitter.com/6RydLYhYUK

While Hrithik Roshan and Saif Ali Khan were promoting their film Vikram Vedha separately to represent their independent characters in the film, this is the first time that the two actors came together on the same platform.

Vikram Vedha is an action-thriller written & directed by Pushkar-Gayatri. The story of Vikram Vedha is full of twists and turns, as a tough cop Vikram (Saif Ali Khan) sets out to track and chase a dreaded gangster Vedha (Hrithik Roshan). What unfolds is a cat-and-mouse chase, where Vedha - a master storyteller helps Vikram peel back layers through a series of stories leading to thought-provoking moral ambiguities.