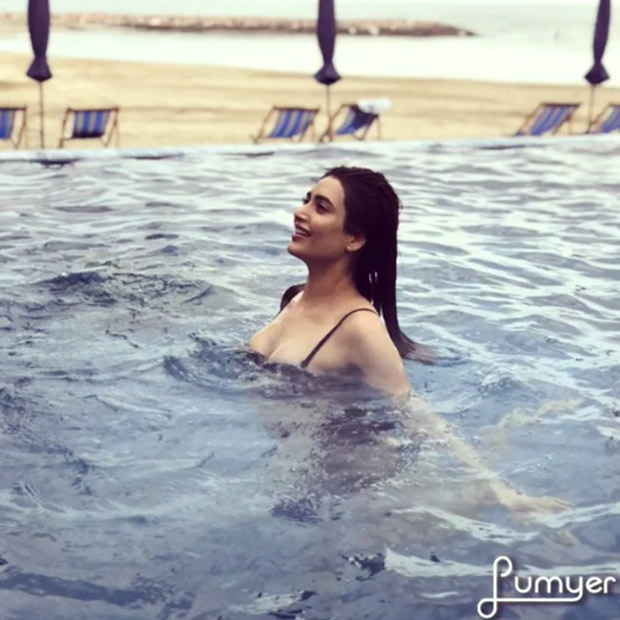 There’s a certain charm of tall actresses in Bollywood. Sushmita Sen, Aishwarya Rai Bachchan, Diana Penty, Deepika Padukone, Tabu, Lara Dutta etc are all quite popular and sizzling and one of the reasons for their popularity is their long height. Karishma Tanna also can be added in the list and she’s quite popular, despite not doing too many films. Her Instagram handle is quite something and we are not surprised that she has 1.2 million followers on Instagram.

Yesterday, Karishma Tanna posted an interesting picture that deserves to be seen and savoured. It features her in a candid moment while she was enjoying in a swimming pool during her holiday in Thailand. The picture is taken at a great moment and her smile is quite endearing. The effect of the entire picture however is sizzling. Karishma, moreover, has put an audio effect with the picture as well and hence, the post has a sound of water. It adds to the impact. The caption was, “Miss my holiday…#throwback #huahin #waterbaby #pool #beachlife #karishmaktanna”.

On the film front, Karishma Tanna will be seen in a small role in the Sanjay Dutt biopic. It stars Ranbir Kapoor and Sonam Kapoor and is directed by Rajkumar Hirani. She has done Tina And Lolo, with Sunny Leone, but sadly it’s stuck since a long time. Her last big release was the super-hit sex comedy Grand Masti in 2013. But on television front, Karishma Tanna has been super busy. She has appeared on ‘Jhalak Dikhhla Jaa 9’, ‘Naagarjuna – Ek Yoddha’ and ‘Nach Baliye 7’ in recent times.