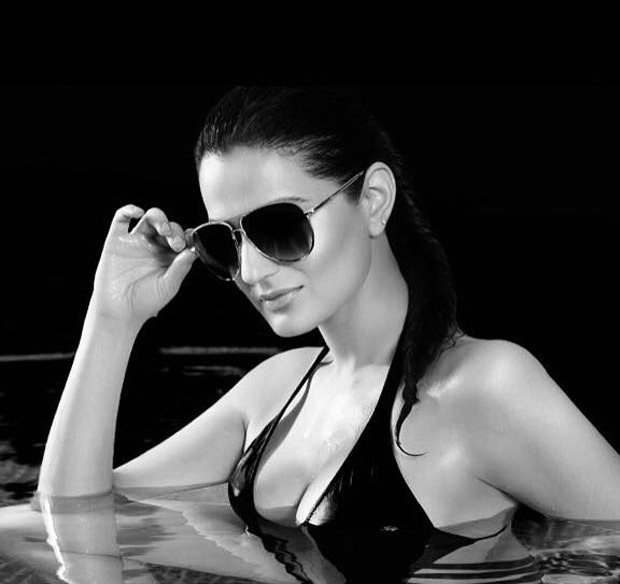 Ameesha Patel has crossed 40 but she is surely one of the hottest girls in Bollywood. She has stopped ageing it seems and surprises everyone with her hotness and sex appeal. Despite not doing films for a long time, the actress still manages to make it to news thanks to her hot avatar which she proudly promotes on her Instagram handle.

The recent picture uploaded by Ameesha Patel on her handle confirms once again why her profile deserves to be followed. It’s a black and white image and features Ameesha Patel wearing a hot bikini. She is submerged in water till her chest. Moreover, she has worn sunglasses and gives a subtle smile, which makes for a great impact. “Have a great week everyone” is the caption with this picture. Ameesha Patel had endorsed Glam Star sunglasses a few years ago and this photo seems to be a part of the photoshoot she had done for the same.

Ameesha Patel had a grand debut with Hrithik Roshan-starrer Kaho Naa... Pyaar Hai and it was followed by the blockbuster, Gadar: Ek Prem Katha, co-starring Sunny Deol. However, later on, she couldn’t keep her stardom intact, mostly due to her choice of films. She was last seen in 2013, in the suspense flick Race 3 and the thriller Shortcut Romeo. She turned producer in 2011-12 with Desi Magic, which features her in double role. But the film is stuck since a long time. She is also a part of another delayed film, the Sunny Deol-starrer Bhaiyyaji Superhit.

Deepika Padukone thanks Hrithik Roshan for…