Haarsh and Bharti are one of the most popular comedic duo of the television industry. They have hosted a number of shows together and have garnered a lot of love from their fans. Bharti and Haarsh have recently made it to the headlines because of the birth of their first baby boy. The couple has been showered with love and blessings by fans and celebrities. 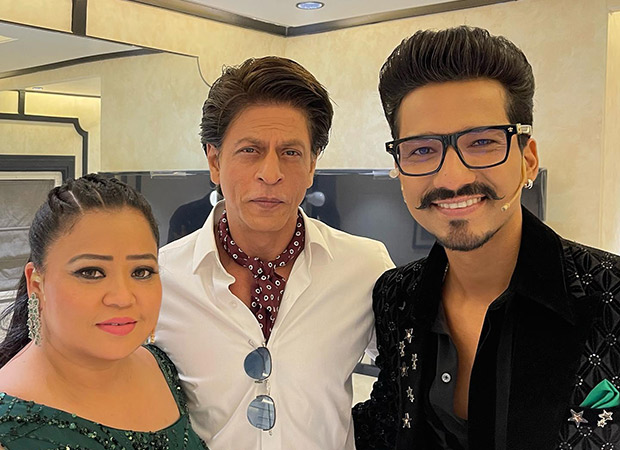 Recently, Bharti and Haarsh unexpectedly bumped into Shah Rukh Khan. The couple were at the Jio World Centre where they surprisingly spotted the DDLJ actor. Both Bharti and Haarsh were quite happy to meet the superstar and all of them posed for a happy picture together.

Haarsh took to his official Instagram handle to post the picture of the trio together. In the picture, the couple can be seen in stylish clothes whereas Shah Rukh Khan can be seen donning white attire. The tie around Shah Rukh’s neck caught the attention of the fans as they suspect that the actor is bringing the trend from the 80s back to life.

Haarsh shared the picture on his handle and the caption said, “SRK” with a red heart emoji.

Bharti and Haarsh are currently shooting to fulfill their work commitments. They are often seen giving a glimpse of their happy life to their fans via their official social media accounts.

On the other hand Fan actor Shah Rukh Khan is making a comeback to the big screen after a break of 4 years. The fans cannot hold back their excitement as the actor has announced a number of his upcoming films. Shah Rukh will be gracing the big screen with his brilliant acting skills in Siddharth Anand's upcoming thriller, Pathaan. The poster of the film has already been released by the makers and the film is anticipated to be released on January 25, 2023. The actor also has Rajkumar Hirani's Dunki along with Taapsee Pannu. The film will hit the big screen in December this year. Shah Rukh Khan will also play a prominent role in  Atlee's Jawan.