The much-awaited trailer of Gully Boy was launched in a grand event in Mumbai with the present stars Ranveer Singh and Alia Bhatt. The film’s director Zoya Akhtar, producer Ritesh Sidhawani and Farhan Akhtar were also present at the trailer launch. The event started with Ranveer Singh performing rap on 'Asli Hip Hop'. Along with that, celebrations took place at the trailer launch event where actor Ranveer Singh rapped Happy Birthday song for Farhan followed by cake cutting ceremony. Ranveer and Alia were seen making graffiti by putting colour on the poster. 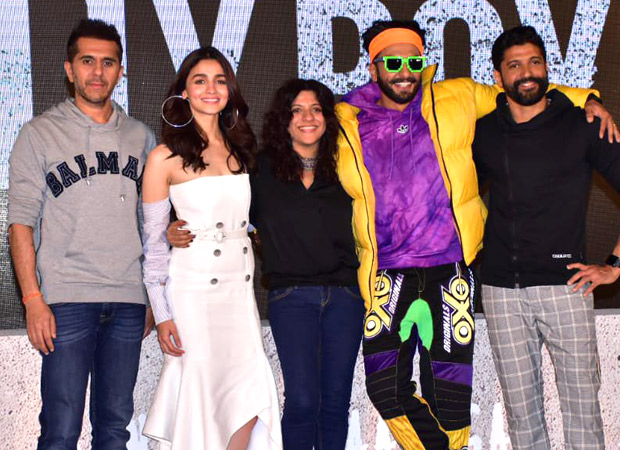 Talking about how the concept of street rappers and their story came to her, director Zoya Akhtar revealed, "I was editing Dil Dhadakne Do. And my editor showed me a video of Naezy. He is a rap artiste. It was authentic desi rap, and the journey of Gully Boy started."

This would be the second time Zoya and Ranveer will collaborate after Dil Dhadakne Do. Working for the second time, Zoya said, "Ranveer Singh is a method actor. If he has to rap all day, he can rap all day. Ranveer is the energizing bunny, but he is extremely sensitive and has a very high IQ. When you are shooting with him, he throws all his energy in the first take, and then he gets into the character."

Co-produced by Farhan Akhtar and Ritesh Sidhwani’s Excel Entertainment and directed by Zoya Akhtar, Gully Boy will release on February 14 in India.