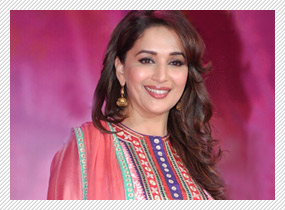 Ever since Gulaab Gang was announced with Madhuri Dixit in the lead, speculations have continued on whether the film is based on the life and times of Sampat Pal Devi who has formed a Gulabi Gang of her own. Even as a namesake documentary has just been released, those associated with Anubhav Sinha and Sahara Movie Studios deny that their film has its bearings in the real life personality.

On being asked if the biopic factor excited her to pick up this Soumik Sen directed film, even Madhuri Dixit responds in negative.

"To put the matters straight, Gulaab Gang is not a biopic. It is not based on anyone's life," says Madhuri with heavy stress on her words, "The character of Rajjo that I play in the film is completely fictitious. See, sometimes you may get inspiration from a work of art as well. It could be a painting, picture, anything. That doesn't mean that you are bringing that exactly in your film."

She has earlier worked in a few films that had their basis as women empowerment, case in point being Mrityudand and Lajja. How far is Gulaab Gang removed from these films?

"Well, Gulaab Gang too has a message but it is told in a very entertaining manner there is no sermonizing anywhere. Anyways, I don't think there is any place for lectures in films. What makes the film further interesting is the fact that both the hero and the villain are women here. I loved it when (director) Soumik (Sen) said that he wanted people to forget about the protagonist as well as antagonist being women. As a matter of fact, they could well have been men," details Madhuri.

For the actress of three decades who has played a plethora of characters in the past, Madhuri is making a swift transition from 'Begum' [Dedh Ishqiya] to 'Rajjo' [Gulaab Gang]. What did it take for her to get into an altogether different body language for this contemporary tale?

"After reading the script, I had a particular look of Rajjo in mind. The makeup and hair came into place and then once the costume designer dressed me up, things started flowing automatically," reflects Madhuri, "See, for Begum, I had to talk in an different way with a lot of 'tehzeeb' and 'tameez' intact. It had to be all very poetic and sweet. Moreover, she was a very different person when alone as there was a lot of sadness and emptiness in her. On the other hand, Rajjo is very strong. It reflects in her dialogues, the way she mouths them, the whole body language and especially the way she walks."

Well, we are waiting to catch this fiery avtar!