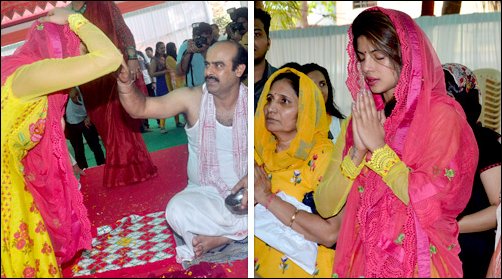 We all know that this is one week which we will have been eagerly waiting for. For the 'tribe' who are better known as 'starters' and 'tube lights', we are indeed talking about Valentine's week, the week that's full of love, love and more love that's interspread with mush! With such an atmosphere where love is in the air, Bollywood Hungama is all set to boost up your love spirits for this season with its entertaining puzzle 'Guess Who', that's better known as 'World's Envy, India's Pride'!


This week's celebrity is someone, who, after having started off her showbiz career as a model, then a beauty queen, then an international beauty title holder and then settled for not less than a topnotch position in Bollywood! She is someone who has been associated with lot of campaigns working towards the development of women. She has done films ranging from almost all the walks and spheres of life. If that wasn't enough, then, she also has exercised her vocal cords so much that, she has an international fan following, India and Indians notwithstanding! The last clue is however in the form of the popular saying 'She is the exact opposite of 'Mummy's grown up boy'!


If you think you have Guessed Who this week's 'Guess Who', then, think no further and immediately post your answers below: