Priyanka Chopra seems to be having a ball of a time in the U.S. Before she returns to her homeland India, the actress seem to be going on a fun spree exploring concerts to indulging in some junk food delicacies to spending quality time with friends. The latest update on that front is some Summer time that the actress was seen spending with her girl gang. 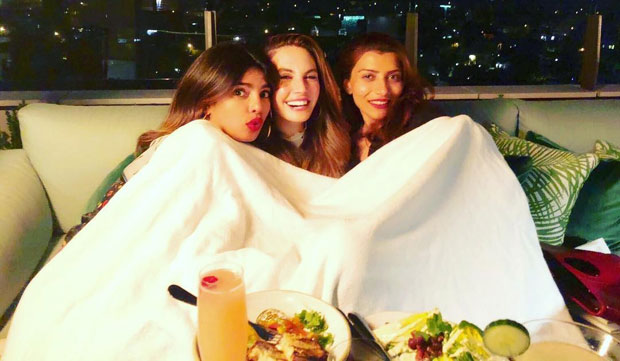 Priyanka Chopra, who loves to be on social media, decided to take to Instagram to share a fun shenanigan as she was seen enjoying the summer in Los Angeles, California. She posted this picture, a day ago, with her girl gang that includes TV host Elizabeth Chambers and filmmaker Mubina Rattonsey. The trio was seen enjoying a cozy night in a blanket and of course, adding to their fun was the massive spread of some yum food.

Priyanka Chopra went on to add, “LA summers.. go figure!! Brrrrr! With my bawse Babes.. @elizabethchambers @mubinarattonsey #ladiesnight.” This is not the first time where we saw Priyanka chilling with the girls.

A few days ago, Priyanka had taken to Instagram to share another picture with the duo wherein the three of them were seen indulging in some burgers and fries.

On the film front, Priyanka Chopra has finally decided to make a comeback to Bollywood. She will be seen reuniting with her Salaam-E-Ishq and God Tussi Great Ho co-star Salman Khan in Bharat. The film, directed by Ali Abbas Zafar, is a remake of the Korean film Ode To My Father. Besides that, the actress also has a line-up of regional films that are currently in production under her banner Purple Pebble Pictures.

Speaking on her much talked about series Quantico, the actress has concluded the shooting for the series. The third season of the crime thriller drama will be the final season of the show. On the Hollywood front, Priyanka Chopra will next be a part of Isn’t It Romantic?

Also Read: REVEALED: Priyanka Chopra to now produce a TRILINGUAL based on the life of Rabindranath Tagore and here are the details