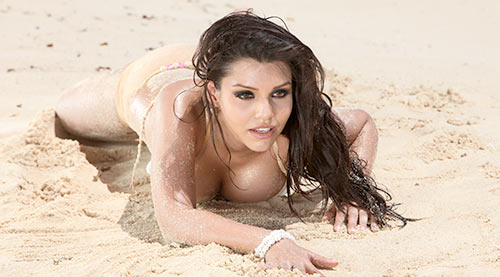 
The film deals with the modeling industry. Was it really a cakewalk for you to get going in front of the camera or there was some real effort required to get the part right?
I feel that today when audiences look at you as a film-star, they expect you to be a complete package. They want someone who looks good, dances well and of course performs well. When you are trying to be an actress, you have to be everything. We worked hard to make sure that we come across as glamorous on screen and also delivered a credible act.


How did you go about it?
There was a lot of training involved. Also, the characterization mattered a lot. When you get an opportunity to play such a wonderful part in your very first film, it is incredible by all means. You don't want to lose out on an opportunity like that. My character in the film is that of a very simple girl from Goa who is grounded and has high morals in her life. The need was clear - I had to perform well.


And look enticing as well?
(Laughs) Of course. I remember when I was shooting for the swimsuit part, (choreographer) Ganesh Hegde came to me and said that 'At this very point, I don't care about your character as you need to kill it with your looks and be sexy.' This was a very clear ask from him, and justifiable too for that portion in the film.


However, as it happens in the industry, there is always a risk of getting typecast where for your next lot of films too; directors would expect an out and out glam persona. Do you worry about that?
See, pehli baat toh yeh hai that even when this typecast thing happens in the industry, successful people manage to break it for 90% of the times. You look at Shahrukh Khan and Priyanka Chopra. They could have been typecast after Baazigar and Aitraaz, but they didn't. It all boils down to how you are able to perform and come up trumps with any role.


So you were not skeptic at all?
Not about the glam part, but the fact that there were five girls in the film (smiles). See, let the fact be stated - everyone wants a solo launch in the industry. However, in Calendar Girls, all five of us have an individual track and none of us is superior or inferior to anyone. Madhur sir said that all five of us were equal in the film. I trusted him and his vision.


How did you live his vision though?
(Laughs) One of the lines that he often repeated was that 'Chill Kar'. Whenever I delivered a shot, he used to say that I have done well and gone beyond his expectations. I was never really sure whether he really meant it or was just saying it to boost my morale. Still, such good words indeed meant a lot to me as an actress. Also, when I used to see the monitor, these scenes actually came across well. I also remember one of the other things that he always said which was to never question a director as when he says a shot has come across as okay, it is indeed okay. So yeah, it was a win-win situation after all!